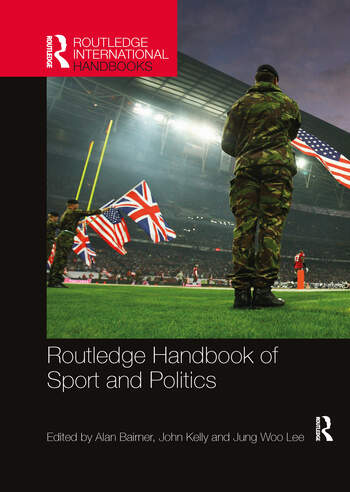 Routledge Handbook of Sport and Politics

Sport is frequently considered to be an aspect of popular culture that is, or should be, untainted by the political. However, there is a broad consensus among academics that sport is often at the heart of the political and the political is often central to sport. From the 1936 Olympic Games in Nazi Germany to the civil unrest that preceded the 2014 World Cup in Brazil, sport and politics have remained symbiotic bedfellows.

The Routledge Handbook of Sport and Politics goes further than any other book in surveying the complex, embedded relationships between sport and politics. With sections addressing ideologies, nation and statehood, corporate politics, political activism, social justice, and the politics of sports events, it introduces the conceptual foundations that underpin our understanding of the sport-politics nexus and examines emergent issues in this field of study.

Including in-depth case studies from North America, South America, Europe, the Middle East, Africa and Asia, this is an essential reference for anybody with an interest in the social scientific study of sport.

Alan Bairner is Professor of Sport and Social Theory at Loughborough University, UK. He is co-author of Sport, Sectarianism and Society in a Divided Ireland and author of Sport, Nationalism and Globalization: European and North American Perspectives. He also edited Sport and the Irish: Histories, Identities, Issues and co-edited The Politics of the Olympics: A Survey. He is the founding editor and editor-in-chief of the Asia Pacific Journal of Sport and Social Science and serves on the editorial boards of a number of journals including the International Review for the Sociology of Sport.

John Kelly is the programme director for the undergraduate Sport and Recreation Management degree at the University of Edinburgh, UK, where he is a founding member of the Edinburgh Critical Studies in Sport (ECSS) research group. His research interests are varied and his articles have looked at "sectarianism" and the Scottish media, sociology of rugby union, symbolic self-representations of ballet dancers, sport and militarism and schoolchildren’s virtual idealised body image. His previous books are Sport and Social Theory: An Introduction (co-written with Gyozo Molnar) and Bigotry, Football and Scotland (co-edited with John Flint).

Jung Woo Lee is Lecturer in Sport and Leisure Policy at the University of Edinburgh, UK. He is an associate editor of the Asia Pacific Journal of Sport and Social Science and a founding member of the Edinburgh Critical Studies in Sport (ECSS) research group. His research interests include sport media and communication, semiotics, sport mega-event studies and globalisation of sport. He has published articles in various books and peer-reviewed journals including Sociology, the International Review for the Sociology of Sport, the Journal of Sport and Social Issues, the International Journal of Sport Communication, Communication and Sport and Sport in Society.

Routledge Handbook of Sport and Politics