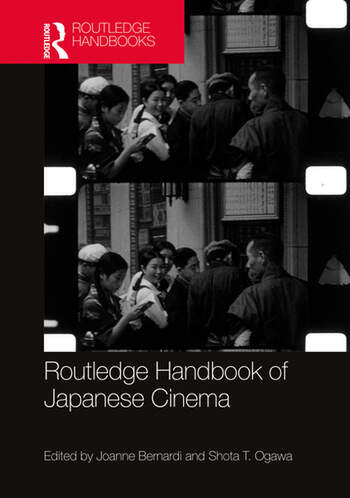 The Routledge Handbook of Japanese Cinema provides a timely and expansive overview of Japanese cinema today, through cutting-edge scholarship that reflects the hybridity of approaches defining the field.

The volume’s twenty-one chapters represent work by authors with diverse backgrounds and expertise, recasting traditional questions of authorship, genre, and industry in broad conceptual frameworks such as gender, media theory, archive studies, and neoliberalism. The volume is divided into four sections, each representing an emergent area of inquiry:

This is the first anthology of Japanese cinema scholarship to span the temporal framework of two hundred years, from the vibrant magic lantern culture of the nineteenth century, through to the formation of the film industry in the twentieth century, and culminating in cinema’s migration to gaming, surveillance video, and other new media platforms of the twenty first century.

This handbook will prove a useful resource to students and scholars of Japanese studies, film studies and cultural studies more broadly.

2. Beyond Mt. Fuji and the Lenin Cap: Identity Crisis in Taniguchi Senkichi’s Akasen kichi (The Red Light Military Base, 1953)

3. Home Movies of the Revolution: Proletarian Filmmaking and Counter-Mobilization in Interwar Japan

4. When Marnie Was There: Female Friendship Film and the Genealogy of Queer Girls Culture

6. Geysers of Another Nature: The Optical Unconscious of the Japanese Science Film

8. “Fugitives” from the Studio System: Ikebe Ryō, Sada Keiji, and the Transition from Cinema to Television in the Early 1960s

9. Solo Animation in Japan: Empathy for the Drawn Body

Part III. Intermedia as an Approach: Tracing Genealogies across Disciplines and Media

13. Between Silent and Sound: The Liminal Space of the Japanese "Sound Version"

14. Marionettes No Longer: Politics in the Early Puppet Animation of Kawamoto Kihachirō

15. Rhetorics of Autonomy and Mobility in Japanese "AAA" Games: The Metal Gear Solid and Resident Evil Series within a Global Media Context

16. Pointing Through the Screen: Archiving, Surveillance, and Atomization in the Wake of Japan’s 2011 Triple Disasters

17. A Historical Survey of Film Archiving in Japan

18. Japanese Film History and the Challenges of IMAGICA WEST Corp.

Shota T. Ogawa is Assistant Professor of Cinema Studies at Nagoya University, Japan. With a background in Visual and Cultural Studies, his research interests include postcolonial hybridity in Japanese cinema, tourism and travel films in imperial Japan, and trans-cultural migration of passing narratives.