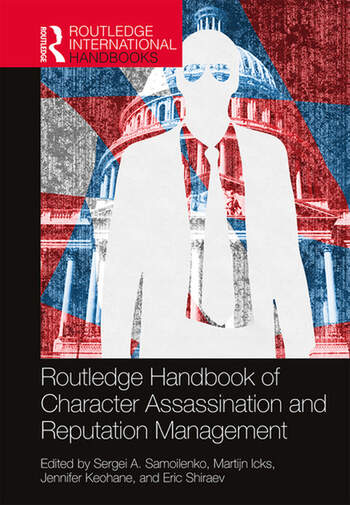 In modern politics as well as in historical times, character attacks abound. Words and images, like symbolic and psychological weapons, have sullied or destroyed numerous reputations. People mobilize significant material and psychological resources to defend themselves against such attacks. How does character assassination "work," and when does it not? Why do many targets fall so easily when they are under character attack? How can one prevent attacks and defend against them?

The Routledge Handbook of Character Assassination and Reputation Management offers the first comprehensive examination of character assassination. Moving beyond studying corporate reputation management and how public figures enact and maintain their reputation, this lively volume offers a framework and cases to help understand, critically analyze, and effectively defend against such attacks. Written by an international and interdisciplinary team of experts, the book begins with a theoretical introduction and extensive description of the "five pillars" of character assassination: (1) the attacker, (2) the target, (3) the media, (4) the public, and (5) the context. The remaining chapters present engaging case studies suitable for class discussion. These include:

This handbook will prove invaluable to undergraduate and postgraduate students in communication, political science, history, sociology, and psychology departments. It will also help researchers become independent, critical, and informed thinkers capable of avoiding the pressure and manipulations of the media.

Sergei A. Samoilenko is a public relations instructor in the Department of Communication at George Mason University. His research focuses on issues in crisis communication, reputation management, and post-Soviet studies. He is a co-editor of Deception, Fake News and Misinformation Online and Traditional and New Media Studies in Eastern Europe and Eurasia.

Martijn Icks is Lecturer in Ancient History at the University of Amsterdam. He specializes in Roman imperial history and the history of character assassination. His study on the Roman emperor Elagabalus has appeared in three languages.

Jennifer Keohane is Assistant Professor in the Klein Family School of Communications Design at the University of Baltimore. Her current research explores the rhetoric of the labor movement in the United States. She is the author of Communist Rhetoric and Feminist Voices in Cold War America, and her other research has appeared in Women's Studies in Communication, Rhetoric Society Quarterly and Rhetoric Review.

Eric Shiraev teaches at George Mason University. He is an author, a co-author, and co-editor of twenty books and numerous publications in the fields of political psychology, international relations, and cross-cultural studies. Besides his teaching and scholarly work, Shiraev writes policy briefs and opinion essays for government agencies, NGOs, and the media.

"Character assassination is poisoning our civil discourse. The editors have created a book that is essential reading for citizens who must learn how to tell truth from fiction. This book will help guide us on how to handle this issue in the future." — Donna Brazile, Democratic Strategist, Former Chairwoman, Democratic National Committee and Adjunct Professor, Georgetown University

"An impressive effort to conceptualise character assassination, embracing a variety of ways of aggressive use of information, as practices stretching across time and space. As old as the world itself, yet also a novel symptom of our times, the informal practices of character assassination is an important indicator of defects of formal institutions in the post-truth era. This Handbook is a testimony of how common the information misuse has become, greatly assisted by cyber-possibilities and the increasingly un-governable societies." — Alena Ledeneva, Professor of Politics and Society, University College London, Founder of the UCL Global Informality Project

"This book is an excellent educational and scientifically sound guide to studying character assassination and reputation management. The team of editors gathered research, insights, and a wide range of cases from prominent scholars across the world. It is a must-read for researchers and practitioners who seek to critically discuss the most notable features of character assassination and find the defenses against it." — Nancy Snow, Ph.D., Professor Emeritus at California State University, Fullerton and Pax Mundi Professor of Public Diplomacy at Kyoto University of Foreign Studies, Japan

"This book is an extremely valuable resource tool that provides a wealth of valuable data, theory and analysis illustrating how personal attack arguments work as powerful public relations tools in many fields and settings. It shows in fascinating detail how the ad hominem argument has been around for a long time and continues to be a form of attack that is difficult to resist or counter. It is especially relevant and useful at this point in the history of politics where personal attacks on reputation and character, such as allegations of hypocrisy, dishonesty, and other failures of moral character, dominate the media." — Douglas Walton, Distinguished Research Fellow of the Centre for Research in Reasoning, Argumentation and Rhetoric, University of Windsor