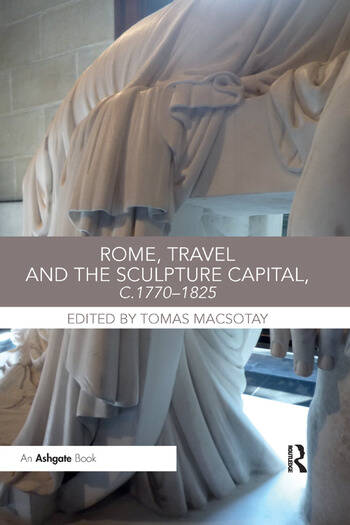 The world that shaped Europe's first national sculptor-celebrities, from Schadow to David d'Angers, from Flaxman to Gibson, from Canova to Thorvaldsen, was the city of Rome. Until around 1800, the Holy See effectively served as Europe's cultural capital, and Roman sculptors found themselves at the intersection of the Italian marble trade, Grand Tour expenditure, the cult of the classical male nude, and the Enlightenment republic of letters. Two sets of visitors to Rome, the David circle and the British traveler, have tended to dominate Rome's image as an open artistic hub, while the lively community of sculptors of mixed origins has not been awarded similar attention.

Rome, Travel and the Sculpture Capital, c.1770–1825 is the first study to piece together the labyrinthine sculptors' world of Rome between 1770 and 1825. The volume sheds new light on the links connecting Neo-classicism, sculpture collecting, Enlightenment aesthetics, studio culture, and queer studies. The collection offers ideal introductory reading on sculpture and Rome around 1800, but its combination of provocative perspectives is sure to appeal to a readership interested in understanding a modernized Europe's overwhelmingly transnational desire for Neo-classical, Roman sculpture.

Introduction: ‘Close up and Far Away’
Tomas Macsotay

Part I
A Space for Encounters

5 In the Shadow of the Star: Career Strategies of Sculptors in Rome in the Age of Canova (c.1780–1820)
Daniella Gallo

7 Multiple Views, Contours and Sculptural Narration: Aesthetic Notions of Neoclassical Sculpture in and out of Rome
Roland Kanz

8 Sculptor and Tourist: John Flaxman and His Italian Journals and Sketchbooks (1787–1794)
Eckart Marchand

Tomas Macsotay is a Ramón y Cajal Research Fellow at the Universitat Pompeu Fabra, Barcelona. He is the author of The Profession of Sculpture in the Paris Académie (2014) and the co-editor of Morceaux. Die bildhauerischen Aufnahmestücke europäischer Kunstakademien im 18. und 19. Jahrhundert (2016).

'This important collection of essays by an international team of scholars sheds new light on Rome’s emergence as an international center of sculptural production and consumption at the period spanning the end of the eighteenth-century through the defeat of Napoleon. Their research takes us inside the studios of artistic giants like Canova and Thorvaldsen as well as of a host of lesser-known figures who made Rome Europe’s sculpture capital par excellence. Together, the authors reveal the Eternal City as a cosmopolitan community of patrons and practitioners whose interactions led to technical breakthroughs, stylistic innovations, and lofty claims for the centrality of sculpture to modern life.' Jeffrey Collins, Bard Graduate Center, USA 'Comprised of archivally rich analyses, this volume traces the myriad forces that ensured Rome's ascendance as the capital of European sculpture in the late-eighteenth and early-nineteenth centuries. Essays chart an expanded topography of sculptural networks, drawing together luminaries like Canova, Cavaceppi, and Flaxman; the specialized tradesmen and assistants whose work was integral to the business of sculpture; and aesthetic interlocutors in the guise of patrons, scholars, and museum personnel. Bringing new life to the material and theoretical lives of sculpture, its makers and audiences, the volume significantly expands our appreciation of the interlinked histories of sculptural restoration, production, and consumption that underwrote a Roman dialectic of ancient and modern.' Sarah Betzer, University of Virginia, USA