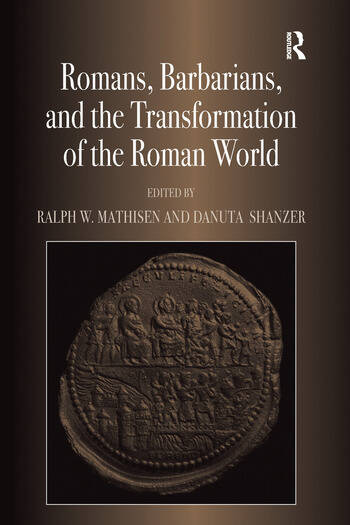 Romans, Barbarians, and the Transformation of the Roman World: Cultural Interaction and the Creation of Identity in Late Antiquity

One of the most significant transformations of the Roman world in Late Antiquity was the integration of barbarian peoples into the social, cultural, religious, and political milieu of the Mediterranean world. The nature of these transformations was considered at the sixth biennial Shifting Frontiers in Late Antiquity Conference, at the University of Illinois at Urbana-Champaign in March of 2005, and this volume presents an updated selection of the papers given on that occasion, complemented with a few others,. These 25 studies do much to break down old stereotypes about the cultural and social segregation of Roman and barbarian populations, and demonstrate that, contrary to the past orthodoxy, Romans and barbarians interacted in a multitude of ways, and it was not just barbarians who experienced "ethnogenesis" or cultural assimilation. The same Romans who disparaged barbarian behavior also adopted aspects of it in their everyday lives, providing graphic examples of the ambiguity and negotiation that characterized the integration of Romans and barbarians, a process that altered the concepts of identity of both populations. The resultant late antique polyethnic cultural world, with cultural frontiers between Romans and barbarians that became increasingly permeable in both directions, does much to help explain how the barbarian settlement of the west was accomplished with much less disruption than there might have been, and how barbarian populations were integrated seamlessly into the old Roman world.

'The present volume comprises twenty-five stimulating papers... the framework and its scrupulous edited papers constitute a research program applicable not only to peoples of western Eurasia but also to indigenes and outsiders in other periods.' The Historian '... a book well worth reading. All in all, this volume provides the reader with many different perspectives on barbarian and Roman interaction in late antiquity. Perhaps the most valuable contribution of the book is the recognition of the fact that the transformation of the Roman world took place in a Roman political, cultural and geographical context. Even the role of the barbarians was defined within Roman parameters and was dependent upon cultural traits as well as political and religious issues.' Opuscula 'This book is about ’the creation of [a] late antique polyethnic cultural world, with cultural frontiers between Romans and barbarians that were increasingly permeable in both directions’ (p. 4). It is not the only way to approach this period, but the debate is one with which every scholar working on this period has to engage, and this volume is a significant contribution.' English Historical Review

Romans, Barbarians, and the Transformation of the Roman World: Cultural Interaction and the Creation of Identity in Late Antiquity