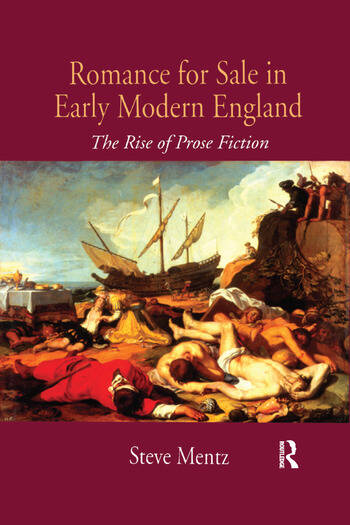 Romance for Sale in Early Modern England: The Rise of Prose Fiction

The major claim made by this study is that early modern English prose fiction self-consciously invented a new form of literary culture in which professional writers created books to be printed and sold to anonymous readers. It further claims that this period's narrative innovations emerged not solely from changes in early modern culture like print and the book market, but also from the rediscovery of a forgotten late classical text from North Africa, Heliodorus's Aethiopian History. In making these claims, Steve Mentz provides a comprehensive historicist and formalist account of prose romance, the most important genre of Elizabethan fiction. He explores how authors and publishers of prose fiction in late sixteenth-century England produced books that combined traditional narrative forms with a dynamic new understanding of the relationship between text and audience. Though prose fiction would not dominate English literary culture until the eighteenth century, Mentz demonstrates that the form began to invent itself as a distinct literary kind in England nearly two centuries earlier. Examining the divergent but interlocking careers of Robert Greene, Sir Philip Sidney, Thomas Lodge, and Thomas Nashe, Mentz traces how through differing commitments to print culture and their respective engagements with Heliodoran romance, these authors helped make the genre of prose fiction culturally and economically viable in England. Mentz explores how the advent of print and the book market changed literary discourse, influencing new conceptions of what he calls 'middlebrow' narrative and new habits of reading and writing. This study draws together three important strains of current scholarly inquiry: the history of the book and print culture, the study of popular fiction, and the re-examination of genre and influence. It also connects early modern fiction with longer histories of prose fiction and the rise of the modern novel.

'This learned study offers important new contexts for the prose romances”and authorial careers”of Sidney, Greene, Lodge, and Nashe. Mentz recovers a 'Heliodoran Moment' in the 1580s and 90s, vivid in its generic and rhetorical jostlings and vital in its implications for our histories of prose fiction, print culture, and the literary marketplace.' Professor William H. Sherman, University of York, UK 'This lively study offers original perspectives on two processes that have attracted growing critical attention: the emergence of print authorship, and the development of pre-novelistic fictions. Mentz compellingly argues that Elizabethan prose fiction was crucial to both processes, as Elizabethan writers sought models for their uncertain roles in the chance-driven narratives of Greek romance.' Lori Humphrey Newcomb, Associate Professor of English, University of Illinois at Urbana-Champaign '... engaging new study... this book is a valiant production, full of interesting detail, arresting in its novelty, comprehensive in the scope of the background reading, and worth the consideration of all students of early prose fiction.' Renaissance Quarterly ’... a rich, original and informative book which is a pleasure read: it should be essential reading for all those interested in the changing fashions of Renaissance prose romance.’ Early Modern Literary Studies ’... Mentz's study provides compelling new contexts for prose romance and for authorial careers. His study of how authors strove to situate themselves in their peritexts provides fresh insight into how popular romance sold itself.’ Journal of British Studies ’If nothing else, this book will remain a resource and point of reference for early modernists with an interest in Elizabethan prose fiction... Romance for Sale in Early Modern England represents a broad critical updating and reconsideration of the field of Elizabethan prose fiction, and it is timely as such. Many readers will welcome it.’

Romance for Sale in Early Modern England: The Rise of Prose Fiction