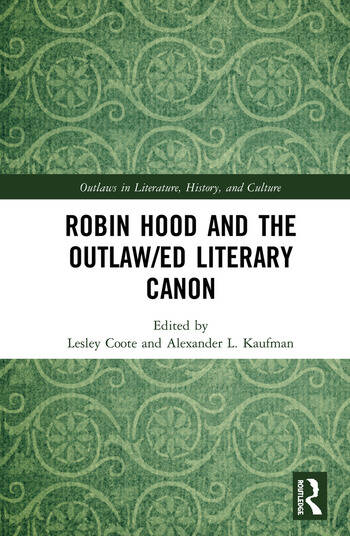 This cutting-edge volume demonstrates both the literary quality and the socio-economic importance of works on "the matter of the greenwood" over a long chronological period. These include drama texts, prose literature and novels (among them, children's literature), and poetry. Whilst some of these are anonymous, others are by acknowledged canonical writers such as William Shakespeare, Ben Jonson, and John Keats. The editors and the contributors argue that it is vitally important to include Robin Hood texts in the canon of English literary works, because of the high quality of many of these texts, and because of their significance in the development of English literature.

1. Robin Hood and the Margins of Romance: Insights on Canon Formation and Maintenance

2. By Words and By Deeds: The Role of Performance in Shaping the "Canon" of Robin Hood

3. Robin Hood and the King and Commoner Tradition: "The best archer of ilkon, / I durst mete hym with a stone"

4. Robin Hood’s Passions: Emotion and Embodiment in Anthony Munday’s The Downfall and The Death of Robert, Earle of Huntington (c. 1598)

5. Canonicity and "Robin Hood": The Morris Dance and the Meaning of "Lighter than Robin Hood" in the Prologue to Fletcher and Shakespeare’s The Two Noble Kinsmen

6. Ben Jonson’s The Sad Shepherd, the Theme of Compassion, and the Robin Hood Canon

7. "Gone, the Song of Gamelyn": John Keats and the Medieval Robin Hood

8. The Legend of Janosik and the Polish Novel About Robin Hood as Continuations of the Medieval Outlaw Tradition

9. What a Canon Wants: Robin Hood, Romance Novels, and Carrie Lofty’s What a Scoundrel Wants

11. Doing Yeoman Work: Uses of the Robin Hood Tales in the Undergraduate Survey

Lesley A. Coote is a lecturer in Medieval Studies and Medievalism at the University of Hull.

Alexander L. Kaufman is the Reed D. Voran Distinguished Professor of Humanities and Professor of English at Ball State University, where he teaches in the Honors College.