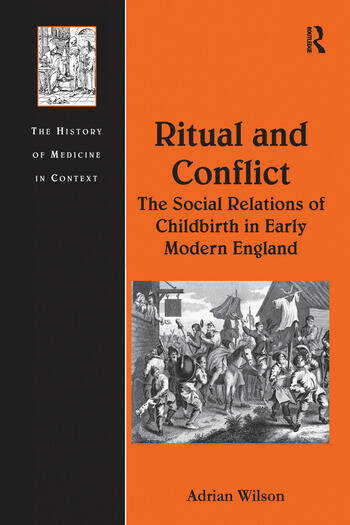 Ritual and Conflict: The Social Relations of Childbirth in Early Modern England

This book places childbirth in early-modern England within a wider network of social institutions and relationships. Starting with illegitimacy - the violation of the marital norm - it proceeds through marriage to the wider gender-order and so to the ’ceremony of childbirth’, the popular ritual through which women collectively controlled this, the pivotal event in their lives. Focussing on the seventeenth century, but ranging from the sixteenth to the eighteenth century, this study offers a new viewpoint on such themes as the patriarchal family, the significance of illegitimacy, and the structuring of gender-relations in the period.

Contents: Introduction; Legitimate and bastard births; The bonds of marriage; Gender and power; The ceremony of childbirth; Conclusion; Bibliography; Index.

Adrian Wilson is Senior Lecturer in History of Medicine at the School of Philosophy, Religion and History of Science, University of Leeds, UK.

'... Wilson's book is an excellent read and a variety of scholars will be interested in his work. ... historians in general will be inspired by his creative use of both primary and secondary sources.' Seventeenth-Century News '... thoughtful and thought-provoking ... the book is a deeply thought-provoking call to action.' Early Modern Women: an Interdisciplinary Journal ’This finely argued deconstruction of the patriarchal family� puts childbirth ritual at the heart of domestic power relations in early modern England. Wilson has a wonderful way with the tricky evidence of sex, marriage and childbirth, and his rigorous scrutiny of concepts puts the whole story of intimacy into its proper perspective. His book offers us a compelling new history of the family and its primary ritual, and a new model for the study of gender and power.’ Laura Gowing, King’s College, London, UK 'Ritual and Conflict has a bigger agenda than offering the most nuanced and complete account of seventeenth-century birth. Despite the book’s rather modest title, Wilson’s quarry is nothing less than a wholesale scrapping of what historians think they know about early modern gender relations... The resulting powerfully ambitious book is heavy on historiography as well as in historical detail: argumentative, technical, typologizing, and driven by close readings, both of secondary and of primary materials.' Sarah Knott, Indiana University, History Workshop Journal 'Ritual and Conflict... not only illuminates the particular rituals of childbirth, but also puts gender relations and the structure of the patriarchal family at the heart of this discourse. By doing so, Wilson highlights the fact that many early modern traditions of childbirth act as reflections of a complex and gendered social system... Ultimately, Ritual and Conflict persuasively argues that the ceremony of childbirth and the lying-in afterwards represented a successful form of resistance to masculine authority and powe

Ritual and Conflict: The Social Relations of Childbirth in Early Modern England