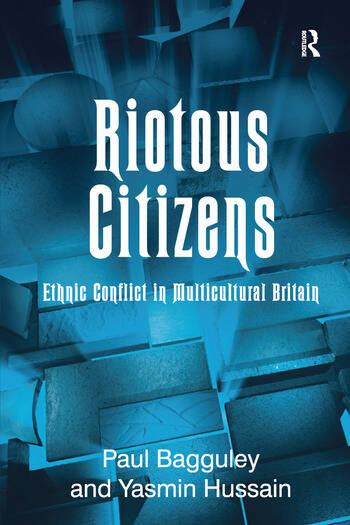 In 2001, Britain saw another summer of rioting in its cities, with violent uprisings in Oldham, Burnley and Bradford. This book explores the reasons for those riots and explains why they mark a new departure in Britain's racial politics. Riots involving racial factors are nothing new in Britain. Historically violent uprisings could be blamed on heavy policing of predominantly minority communities, but the riots of 2001 were more complex. With elements of 1950s-style race riots and echoes of the 1980s riots which saw South Asians confronting the police as the adversary, the spread of unrest in 2001 was also clearly linked to poverty, unemployment and the involvement of the political far-right. Linking original empirical research conducted amongst the Pakistani community in Bradford with a sophisticated conceptual analysis, this book will be required reading for courses on race and ethnicity, social movements and policing public order.

Dr Paul Bagguley is Senior Lecturer in Sociology at the University of Leeds. His books include: 'From Protest to Acquiescence? Political Movements of the Unemployed' (1991), 'Transforming Politics: Power and Resistance' (co-edited, with J. Hearn, 1999) and 'Relating Intimacies: Power and Resistance' (co-edited with Julie Seymour, 1999). Dr Yasmin is a Lecturer in the Department of Sociology and Social Policy at the University of Leeds. She is the author of 'Diasporic Womanhood: Creating Identities in British South Asian Women's Writing' (forthcoming, 2005).

’This is a well crafted and original account of urban riots and disorder in multicultural Britain. It will be essential reading for all those, students and scholars alike, who want to understand the changing dynamics of this important social and policy issue.’ John Solomos, City University London, UK 'A fascinating and important book which brings a strong theoretical understanding to bear upon very vivid and revealing empirical material. Analysing the riots and their wider context and implications the authors address questions which are of importance to us all. The book is timely and yet explores issues which are likely to be with us for some time.' Nick Crossley, University of Manchester, UK 'Sociological studies that transform the way academics think are not easy to find. The authors of Riotous Citizens: Ethnic Conflict in Multicultural Britain make no such claim for their book, yet they would not be unjustified in doing so...If enough social scientists and their students read this brilliant book, it is at least possible that some of us will be able to prevent the shameful history of racism repeating itself next time the media spectacle of so-called race riots confronts us.' Times Higher Education Supplement 'Riotous Citizens impresses with its wide and varied range of scholarly references and detailed critical engagements with this literature, drawing directly on a considerable body of original data gathered by the authors, and carefully and subtly presented and analysed. The book should be required reading for anyone interested in contemporary political discourses of citizenship, multiculturalism and Islamin Britain. Above all, it shows that apparently irrational and destructive rioters acted in terms of commitments and values widely shared with other members of British society.' Journal of Intercultural Studies The book is well-researched, extensive and detailed in terms of the issues that are explored and the amount of empirical data utilised, yet al