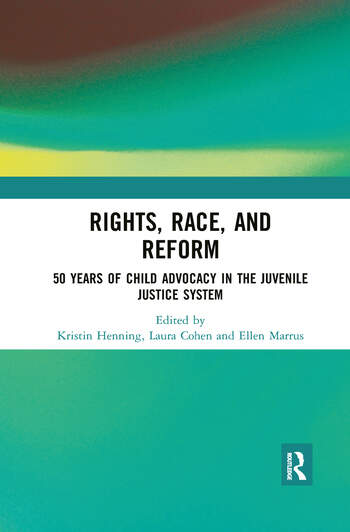 Rights, Race, and Reform: 50 Years of Child Advocacy in the Juvenile Justice System

In 1962, a 15-year-old Arizona boy named Gerald Gault may or may not have made a lewd phone call to a neighbor. Gerald was arrested, prosecuted, removed from his parents’ custody, and sent to a juvenile prison, all without legal representation. Gerald’s mother’s outrage at the treatment of her son eventually propelled the case to the United States Supreme Court. With its sweeping 1967 decision in In re Gault, the Court revolutionized the American juvenile court system by finding that children charged with delinquency have a constitutional right to counsel.

This anthology, which commemorates the fiftieth anniversary of the Gault decision, blends, across its three parts, legal and historical analyses, oral history, and personal narrative to provide an overview of modern Supreme Court juvenile justice jurisprudence, the advocates and organizations that defend children in juvenile court, the role these lawyers have played in the fight for justice for accused children, and the contemporary challenges facing juvenile defenders and their clients. The authors are leading juvenile justice reformers, advocates, and scholars, all of whom have been deeply involved in shaping modern juvenile justice policy and practice and most of whom have represented children in juvenile court.

This book is for everyone concerned about justice in America. The personal narratives about children in the system will intrigue students and academics, engage lay individuals who are interested in children’s rights, and guide professionals, legislators, and other policymakers involved in juvenile justice reform and criminology.

Kristin Henning is the Agnes N. Williams Research Professor of Law and Director of the Juvenile Justice Clinic and Initiative at Georgetown Law. Her scholarship on race, adolescence, and juvenile justice appears in journals such as the Cornell Law Review, California Law Review, and NYU Law Review and in books such as Policing the Black Man (Random House, 2017) and Punishment in Popular Culture (NYU Press, 2015). Henning was formerly the Lead Attorney for the Juvenile Unit of the D.C. Public Defender Service and worked closely with the Juvenile Indigent Defense Action Network to develop and co-author the Juvenile Training Immersion Program, a national training curriculum for juvenile defenders. She is the Director of the Mid-Atlantic Juvenile Defender Center and an Adviser to American Law Institute’s Restatement on Children and the Law. She has also served as an expert consultant to the U.S. Department of Justice’s Civil Rights Division and as an investigator in several state assessments of access to counsel for accused youth. Henning has received several awards, including the Robert E. Shepherd, Jr. Award for Excellence in Juvenile Defense by the National Juvenile Defender Center.

Laura Cohen is Distinguished Clinical Professor of Law, the Justice Virginia Long Scholar, and Director of the Criminal and Youth Justice Clinic at Rutgers Law School. She also co-directs both the Rutgers Center on Youth Violence and Juvenile Justice and the Northeast Juvenile Defender Center, and has served as an expert consultant to the U.S. Department of Justice Civil Rights Division in its investigation of systemic due process violations in the St. Louis County, Missouri Juvenile Court. Previously, Cohen was a staff attorney and Director of Training for the New York City Legal Aid Society’s Juvenile Rights Practice. Her scholarship explores topics ranging from juvenile justice and parole to legal ethics and lawyering theory, with a particular focus on the legal representation of adolescents. Cohen has received numerous awards for her work, including the MacArthur Foundation’s Champion for Change Award and the National Juvenile Defender Center’s Robert E. Shepherd Award for Excellence in Juvenile Defense.

Ellen Marrus is the Royce Till Professor of Law at the University of Houston Law Center, the founder and Director of the Center for Children, Law & Policy (CCLP), and the co-director of the Southwest Juvenile Defender Center (SWJDC). She teaches juvenile law, street law, children and the law, professional responsibility, and practice-related courses, and directs clinical programs, including child advocacy clinics and a lab component for her children and a law course where students receive hands-on experience in child dependency cases. In her capacity as Director of CCLP and SWJDC, Marrus has provided technical assistance to public defenders, court appointed juvenile attorneys, the U.S. Department of Justice, juvenile probation, and federal and state legislators. She concentrates her scholarship in the areas of juvenile law, children’s rights, and professionalism, with a focus on representing children in various proceedings and the intersection of juvenile justice with race and gender.

Rights, Race, and Reform: 50 Years of Child Advocacy in the Juvenile Justice System