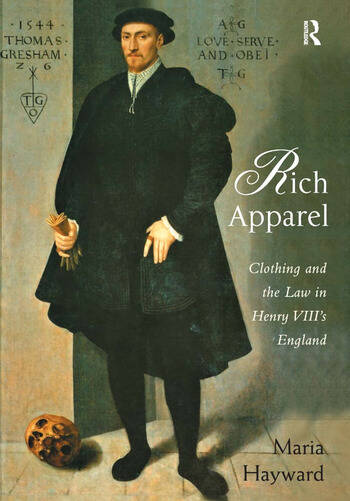 Rich Apparel: Clothing and the Law in Henry VIII's England

English dress in the second half of the sixteenth century has been studied in depth, yet remarkably little has been written on the earlier years, or indeed on male clothing for the whole century. The few studies that do cover these neglected areas have tended to be quite general, focusing upon garments rather than the wearers. As such this present volume fills an important gap by providing a detailed analysis of not only what people wore in Henry's reign, but why. The book describes and analyses dress in England through a variety of documents, including warrants and accounts from Henry's Great Wardrobe and the royal household, contemporary narrative sources, legislation enacted by Parliament, guild regulations, inventories and wills, supported with evidence and observations derived from visual sources and surviving garments. Whilst all these sources are utilised, the main focus of the study is built around the sumptuary legislation, or the four 'Acts of Apparel' passed by Henry between 1509 and 1547. English sumptuary legislation was concerned primarily with male dress, and starting at the top of society with the king and his immediate family, it worked its way down through the social hierarchy, but stopped short of the poor who did not have sufficient disposable income to afford the items under consideration. Certain groups - such as women and the clergy - who were specifically excluded from the legislation, are examined in the second half of the book. Combining the consideration of such primary sources with modern scholarly analysis, this book is invaluable for anyone with an interest in the history of fashion, clothing, and consumption in Tudor society.

Dr Maria Hayward is a reader in History at the University of Southampton and she is a specialist in material culture at the court of Henry VIII. Her books include The 1542 Inventory of Whitehall (2004) and Dress at the Court of King Henry VIII (2007).

'Ultimately, this book is an important read for both students and scholars who are interested in the culture of clothing in early Tudor England.' Journal of British Studies 'There can be no doubt as to the significance of this work. It is a valuable contribution to the field of material culture covering a surprisingly neglected, but demonstrably distinctive, period.' Renaissance Quarterly ’Maria Hayward has made a significant contribution to our understanding of early modern England’s commodity culture. Her meticulously researched book contains a wealth of information that scholars will find fascinating, useful and enlightening.’ Sixteenth Century Journal

Rich Apparel: Clothing and the Law in Henry VIII's England