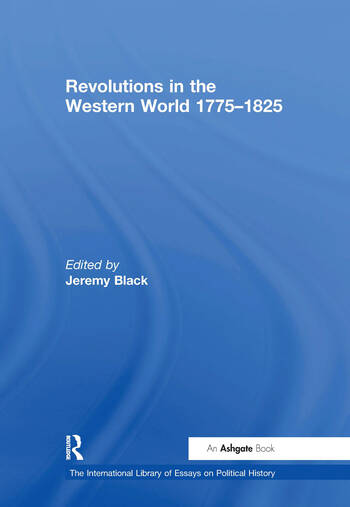 Considering what has been described as an Age of Revolutions, Black assesses a formative period in world history by examining the North American, European, Haitian and Latin American Revolutions. Causes, courses and consequences are all clarified in the articles selected and an introduction charts the major themes.

Contents: Introduction; Part I British America: Why men fought in the American revolution, Robert Middlekauf; Patriots by default: Queens County, New York and the British Army, 1776-1783, Joseph S. Tiedemann; The localist roots of backcountry loyalism: an examination of popular political culture in Virginia's New River valley, Albert H. Tillson Jr; Early American ways of war: a new reconnaissance, 1600-1815, Wayne E. Lee; British strategy in the war of American independence, Piers Mackesy; The origins of the nationalist movement of 1780-1783: congressional administration and the continental army, E. Wayne Carp. Part II France: Public opinion and political culture in France during the 2nd half of the 18th century, Harvey Chisick; Paths to political consciousness: the assembly of notables of 1787 and the 'pre-revolution' in France, Vivian R. Gruder; Politics, culture and the origins of the French Revolution, Sarah Maza; The 'ministry of the hundred hours': a reappraisal, Munro Price; Problems of law and order during 1790, the 'peaceful' year of the French Revolution, Samuel F. Scott; Conspiracy obsession in a time of revolution: French elites and the origins of the terror, 1789-1792, Timothy Tackett; The 9 Thermidor: motives and effects, Martyn Lyons; The ancien régime origins of Napoleonic social reconstruction, Rafe Blaufarb. Part III Elsewhere in Europe: The Dutch affair and the fall of the ancien régime, 1784-1787, Munro Price; Scandinavia and the Atlantic revolution, 1760-1815, H. Arnold Barton; The Brabant revolution: a conservative revolt in a backward country?, J. Craeybeckx; The 1st (and only) year of the May 3 constitution, Daniel Stone. Part IV Haiti: The struggle for black liberty: revolution and emancipation in Saint Domingue, Jennifer J. Pierce. Part V Latin America: The emancipation of America, Jaime E. Rodriguez; Village, nation and constitution: insurgent politics in Papantla, Veracruz, 1810-1821, Michael T. Ducey; Insurrection-reacti

Jeremy Black is Professor in the Department of History, University of Exeter, UK