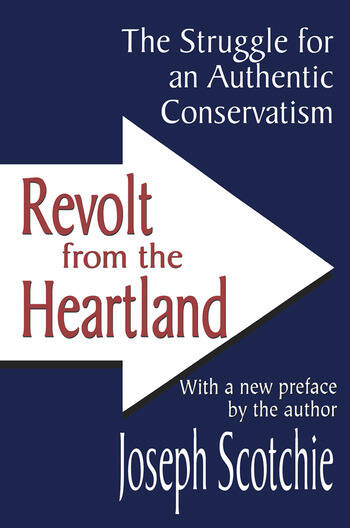 Revolt from the Heartland: The Struggle for an Authentic Conservatism

The dominant forces of American conservatism remain wedded, at all costs, to the Republican Party, but another movement, one with its roots in the pre-World War II era, has stepped forth to fill an intellectual vacuum on the right. This Old Right first rose in opposition to the New Deal, fighting both statism at home and the emergence of an American empire abroad. More recently this movement, sometimes called paleoconservatism, has provided the ideological backbone of modern populism and the opposition to globalization, with decisive effects on presidential politics. In Revolt from the Heartland, Joseph Scotchie provides an intellectual history of the Old Right, treating its main figures and defining its conflict with the traditional left-right political mainstream.

As Scotchie's account makes clear, the Old Right and its descendents have articulated an arresting and powerful worldview. They include an array of learned and provocative writers, including M.E. Bradford, Russell Kirk, Richard Weaver, and Murray Rothbard, and more recently, Clyde Wilson, Thomas Fleming, Samuel Francis, and Chilton Williamson, Jr. Beginning with the movement's anti-Federalist forerunners, Scotchie traces its developments over two centuries of American history. In the realm of politics and economics, he examines the anti-imperialist stance against the Spanish-American War and the League of Nations, the split among conservatives on Cold War foreign policy, and the hostility to the socialist orientation of the New Deal. Identifying a number of social and cultural attitudes that define the Old Right, Scotchie finds the most important to be the importance of the classics, a recognition of regional cultures, the primacy of family over state, the moral case against immigration. In general, too, a Tenth Amendment approach to such recurring issues as education, abortion, and school prayer characterizes the group.

As Scotchie makes clear, the Old Right and its grass-roots supporters have, and continue to be, a powerful force in modern American politics in spite of a lack of institutional support and media recognition. Revolt from the Heartland is an important study of a persisting current in American political life.

Revolt from the Heartland: The Struggle for an Authentic Conservatism