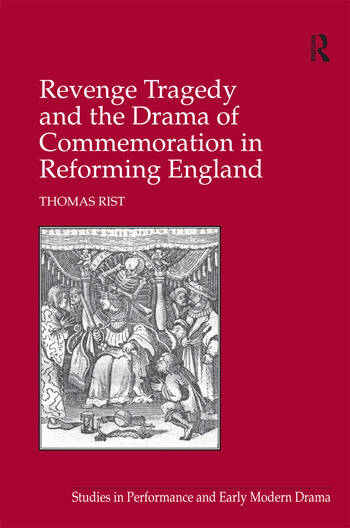 Revenge Tragedy and the Drama of Commemoration in Reforming England

Considering major works by Kyd, Shakespeare, Middleton and Webster among others, this book transforms current understanding of early modern revenge tragedy. Examing the genre in light of historical revisions to England's Reformations, and with appropriate regard to the social history of the dead, it shows revenge tragedy is not an anti-Catholic and Reformist genre, but one rooted in, and in dialogue with, traditional Catholic culture. Arguing its tragedies are bound to the age's funerary performances, it provides a new view of the contemporary theatre and especially its role in the religious upheavals of the period.

Contents: Introduction; 'Outrage fits': revenge and the 'melodrama' of mourning in The Spanish Tragedy, Titus Andronicus and Hamlet; Funerary theatre: mourning, Antonio's Revenge and Paul's theatre; Melodrama and parody: remembering the dead in The Revenger's Tragedy, The Atheist's Tragedy, The White Devil and The Duchess of Malfi; Conclusion; Select bibliography; Index.

Thomas Rist, PhD, is Lecturer in English at the University of Aberdeen in Scotland. He has published widely on Renaissance drama and is the author of one previous book: Shakespeare's Romances and the Politics of Counter-Reformation (1999).

’Rist makes a strong argument for reading revenge tragedies, from The Spanish Tragedy to The White Devil, in the light of their attitudes to remembrance and mourning. His introduction establishes clearly the main lines of the debate: not only in the radical differences between reformed and Catholic attitudes to prayers for the dead, but in contrasting views of excess in mourning. ...Particularly helpful is the examination of Virgilian echoes in The Spanish Tragedy.’ Times Literary Supplement ’... offers a focused reevaluation of English revenge tragedy in light of Reformation challenges to traditional obervances for the dead. Well versed in recent scholarship on the complexity of religious change in early modern England.... All (Rist's) conclusions are useful and productive, and they are buttressed by compelling close observations and the inclusion of fascinating source material. ...Rist's monograph makes a contribution to ” and is of a piece with ” recent reassessments of the Renaissance stage in light of new understandings about the English Reformation... [with] a sense of religious controversy perhaps more detailed and sophisticated than those of previous treatments...’ Renaissance Quarterly ’... a provocative study with a sharply defined thesis that should interest any scholar of the period’s dramatic and theological currents.... Rist’s book raises some fascinating issues ... the book is, as is typical of Ashgate’s varied and innovative offerings, handsomely produced, and deserves to be on many library shelves.’ Early Theatre ’... impressive for the depth and range of its research... he reveals some of the tightly woven religious controversies of the day in great detail. The readings of individual scenes are pin-sharp and nuanced, and the treatment of the religious context constitutes a major step forward in our understanding of these plays and their audiences. ’ Journal of the Northern Renaissance ’... a revisionist attempt to

Revenge Tragedy and the Drama of Commemoration in Reforming England