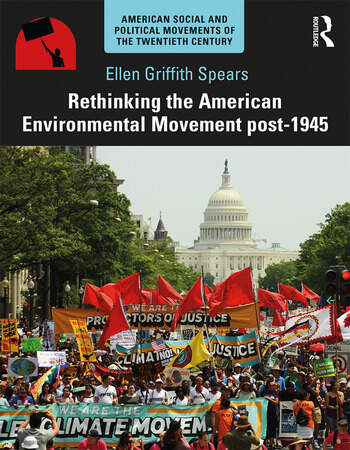 Rethinking the American Environmental Movement post-1945 turns a fresh interpretive lens on the past, drawing on a wide range of new histories of environmental activism to analyze the actions of those who created the movement and those who tried to thwart them.

Concentrating on the decades since World War II, environmental historian Ellen Griffith Spears explores environmentalism as a "field of movements" rooted in broader social justice activism. Noting major legislative accomplishments, strengths, and contributions, as well as the divisions within the ranks, the book reveals how new scientific developments, the nuclear threat, and pollution, as well as changes in urban living spurred activism among diverse populations. The book outlines the key precursors, events, participants, and strategies of the environmental movement, and contextualizes the story in the dramatic trajectory of U.S. history after World War II. The result is a synthesis of American environmental politics that one reader called both "ambitious in its scope and concise in its presentation."

This book provides a succinct overview of the American environmental movement and is the perfect introduction for students or scholars seeking to understand one of the largest social movements of the twentieth century up through the robust climate movement of today.

Introduction: A Field of Movements

Chapter 2: The Great Acceleration and the Rise of Environmentalism (1945-1964)

Chapter 3: Expanding the Field of Movements: From the Wilderness Act to Superfund (1964-1980)

Chapter 4: Conservative Countermovement and the Rise of Environmental Justice (1980-1990)

Chapter 7: Hope in a Strange Season

Ellen Griffith Spears is an associate professor in the interdisciplinary New College and the Department of American Studies at the University of Alabama. She is author of the award-winning Baptized in PCBs: Race, Pollution, and Justice in an All-American Town (2014).