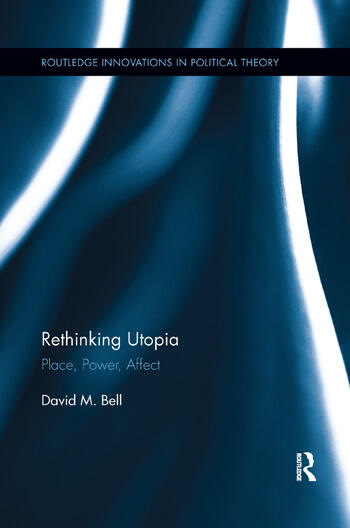 Over five hundred years since it was named, utopia remains a vital concept for understanding and challenging the world(s) we inhabit, even in – or rather because of – the condition of ‘post-utopianism’ that supposedly permeates them. In Rethinking Utopia David M. Bell offers a diagnosis of the present through the lens of utopia and then, by rethinking the concept through engagement with utopian studies, a variety of ‘radical’ theories and the need for decolonizing praxis, shows how utopianism might work within, against and beyond that which exists in order to provide us with hope for a better future.

He proposes paying a ‘subversive fidelity’ to utopia, in which its three constituent terms: ‘good’ (eu), ‘place’ (topos), and ‘no’ (ou) are rethought to assert the importance of immanent, affective relations. The volume engages with a variety of practices and forms to articulate such a utopianism, including popular education/critical pedagogy; musical improvisation; and utopian literature. The problems as well as the possibilities of this utopianism are explored, although the problems are often revealed to be possibilities, provided they are subject to material challenge.

offers a way of thinking about (and perhaps realising) utopia that helps overcome some of the binary oppositions structuring much thinking about the topic. It allows utopia to be thought in terms of place and process; affirmation and negation; and the real and the not-yet. It engages with the spatial and affective turns in the social sciences without ever uncritically being subsumed by them; and seeks to make connections to indigenous cosmologies. It is a cautious, careful, critical work punctuated by both pessimism and hope; and a refusal to accept the finality of this or any world.

Chapter One: Rethinking the Present; or, Our Post-Utopian, Most-Utopian, Anti-Utopian Dystopia

David M. Bell is a Research Associate at Newcastle University, where he works on the Imaginaries of the Future network.

"David Bell’s is one of the most insightful and challenging new voices not only in utopian studies but more broadly in critical theory and cultural studies. In Rethinking Utopia: Place, Power, Affect, he conjoins his engaged theoretical analysis with his political, performative, and pedagogical experience and delivers a deeply considered, and truly dialectical, re-functioning of the utopian problematic that will enable both scholars and activists to work with and in the process of utopian transformation in affective and structural ways. Put aside your reading lists, and turn to this book – and in doing so prepare to have your critical paradigm shifted."—Tom Moylan, Glucksman Professor Emeritus and Founding Director of the Ralahine Centre for Utopian Studies at the University of Limerick

"David Bell's book stands out among recent contributions to the field of utopian studies for its theoretical sophistication and originality. The excellent discussion of utopia as place is particularly noteworthy. I warmly recommend this work to all those interested in rethinking utopia as a tool for self-critical radical political thought in the twenty-first century."—Dr. Laurence Davis, University College Cork, editor of Anarchism and Utopianism (2014) and The New Utopian Politics of Ursula K. Le Guin's The Dispossessed (2005)

"…Bell makes Rethinking Utopia into a text that is not only academically rigorous and provocative but also practically useful in the hands of educators whose experiences are often marked by struggles that seem very far from utopian. Bell’s measured, agonistic, prefigurative utopianism of place helps to show how this struggle can itself have utopian dimensions."—Emile Bojesen, Utopia and Politics

"When working in a field as broad and as often misunderstood as political utopianism, it is important for writers to take a nuanced approach and that is exactly what David Bell does in his analysis in Rethinking Utopia: Place, Power, Affect. …Largely speaking, the author is successful in his analysis and in his goal of enriching the discipline of utopian studies. The greatest strength lies in his weaving in of the various cases and scholars into his own argument, thus proving that it is applicable to a number of different contexts and is also part of a wider tradition of utopian thinking. His criticism of the subject, in particular calling out its homogeneous thinking, is backed up by strong and relevant references to queer theory, feminism and post-colonialism.’ —Ibtisam Ahmed, Political Studies Review

"...an extraordinary book. In Rethinking Utopia Bell balances nuanced engagement with conceptual detail across a variety of disciplinary areas with a wider coherence of purpose so that the guiding aims of the volume are never far from view. This is a closely worked argument for a radical and critically self-aware politics. It is inclusive, conceptually ambitious, and broad in scope. Bell poses fundamental challenges to utopian studies that will likely help shape the subject's future direction of travel. This is all the more so as he astutely perceives the natural limits in scope and (at times necessary) ambiguities of his discussion. Thus the "rethinking" of the title is not an attempt to reinvent the wheel but, rather, to regard utopian scholarship in the context of wider political issues and create a dialogic route through some of the most important recent debates in the discipline."—Adam Stock, Utopian Studies