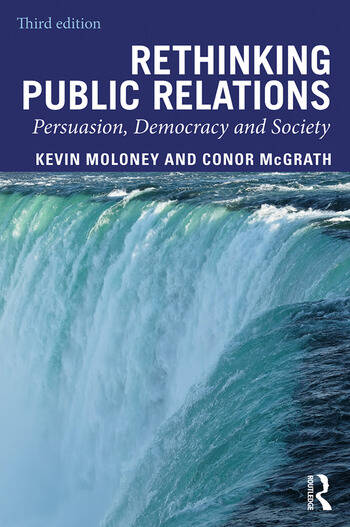 This new (third) edition of Rethinking Public Relations continues the argument of previous editions that public relations is weak propaganda. However, while earlier editions focused on PR as representative of the uneven power distribution in society, this book goes further, conceiving the power of PR as more than just structural but also as having an important rhetorical component.

In this extensively revised edition, Moloney and McGrath dissect the nature of the modern PR industry, arguing that its idealised self-presentation should be replaced by a more realistic and credible defence of the societal value produced by advocacy and counter-advocacy. This book includes expanded coverage of PR’s impact on society (through areas such as CSR, sponsorship and community relations), its relationship with stakeholders, and its role in democratic debate and public policy making. It also considers the ways in which journalism has capitulated to PR in an era of ‘fake news’ and ‘churnalism’ and, in this new edition, the role of digital and social media is examined for the first time.

Maintaining the rigorous and critical stance of previous editions, this new edition will also prove accessible to Master’s level and final-year undergraduate students studying public relations, media and communications studies. Additionally, it will be of great value to practitioners who seek to widen PR’s ‘voices’.

Kevin Moloney was a PR teacher and researcher from 1985 to 2018, most recently at Bournemouth University, UK. He was also a journalist with regional and national papers and spent over a decade working in public relations.

Conor McGrath is a lecturer in PR and lobbying at Ulster University, UK. In addition, he has worked as an MP’s researcher, a self-employed lobbyist, and a public affairs director at a PR agency.

"Quite simply, Moloney and McGrath’s third edition exceeds expectations. They eschew superficial updates for an acute intellectual appraisal of current tensions and transformations in PR. They not only continue with the rigorous rethinking of PR practice and theory under contemporary conditions but suggest how the two might be fused to illuminate injustices, including communication inequities, and to better serve democracy." — David McKie, Professor of Strategic Communication and Leadership at Waikato Management School, University of Waikato, New Zealand

"Moloney and McGrath do an excellent job of shining a light on an important feature of contemporary society, the PR-ization of everything. By exploring the relationships between power, knowledge and discourse, the authors open up important questions for public relations theory and practice on the central issue of persuasion in relation to democracy." — Ian Somerville, University of Leicester, UK

"In a fraught era for liberal democracy, when technological wizardry can automate distrust in what we see, hear and read, Moloney and McGrath offer a timely, candid and welcome perspective on public relations which avoids the familiar extremes: the melodramatic exaggerations of PR’s demonizers and the self-serving disingenuousness of its apologists." — Robert E Brown, author of The Public Relations of Everything and professor of Communications at Salem State University, USA

"Rethinking Public Relations is a milestone text and this is my most eagerly anticipated book of 2019. The third edition continues the proud tradition of asking the difficult and important questions: why so much public relations is, in fact, private; and where the distinction, if any, lies between public relations and propaganda. Narratives about public relations have often been written by critical outsiders: those who explicitly link the rise of public relations to the once-dominant neoliberal project. So a narrative written by informed and thoughtful critical insiders is to be welcomed. The third edition retains the critical approach of the earlier editions, adds in a greater emphasis on rhetoric and persuasion, yet should appeal beyond advanced students and scholars of public relations to anyone interested in the health of our democracy and society." — Richard Bailey, Senior lecturer in Public Relations, Leeds Beckett University, UK and editor of prplace.com