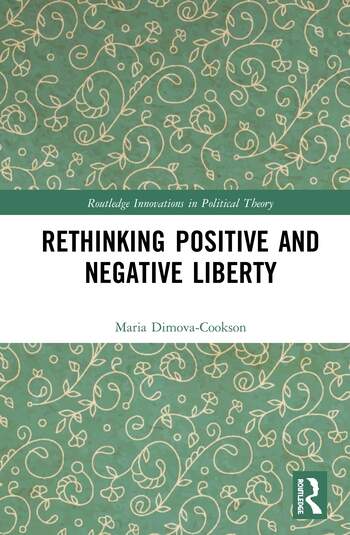 This book argues that the distinction between positive and negative freedom remains highly pertinent today, despite having fallen out of fashion in the late twentieth century. It proposes a new reading of this distinction for the twenty-first century, building on the work of Constant, Green and Berlin who led the historical development of these ideas.

The author defends the idea that freedom is a dynamic interaction between two inseparable, yet sometimes fundamentally, opposed positive and negative concepts – the yin and yang of freedom. Positive freedom is achieved when one succeeds in doing what is right, while negative freedom is achieved when one is able to advance one’s wellbeing. In an environment of culture wars, resurging populism and challenge to progressive liberal values, recognising the duality of freedom can help us better understand the political dilemmas we face and point the way forward.

The book analyses the duality of freedom in more philosophical depth than previous studies and places it within the context of both historical and contemporary political thinking. It will be of interest to students and scholars of liberalism and political theory.

1. Benjamin Constant on Modern People and their Two Liberties

4. Isaiah Berlin, Positive Freedom and the Impact of Moral Authorities on Human Agency

5. Berlin’s Negative Freedom and the Conceptual Work of the Boundaries of Liberty

6. Value Pluralism and the Duality of Freedom

Maria Dimova-Cookson is Associate Professor in Politics at the School of Government and International Affairs, Durham University, UK.