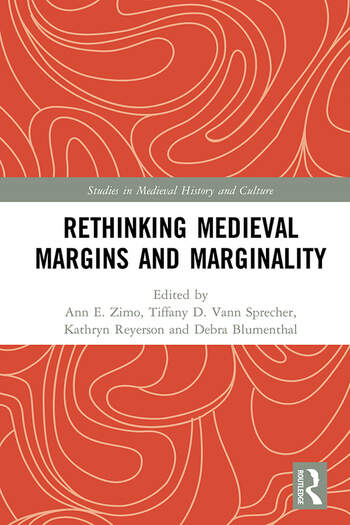 Marginality assumes a variety of forms in current discussions of the Middle Ages. Modern scholars have considered a seemingly innumerable list of people to have been marginalized in the European Middle Ages: the poor, criminals, unorthodox religious, the disabled, the mentally ill, women, so-called infidels, and the list goes on. If so many inhabitants of medieval Europe can be qualified as "marginal," it is important to interrogate where the margins lay and what it means that the majority of people occupied them. In addition, we scholars need to reexamine our use of a term that seems to have such broad applicability to ensure that we avoid imposing marginality on groups in the Middle Ages that the era itself may not have considered as such. In the medieval era, when belonging to a community was vitally important, people who lived on the margins of society could be particularly vulnerable. And yet, as scholars have shown, we ought not forget that this heightened vulnerability sometimes prompted so-called marginals to form their own communities, as a way of redefining the center and placing themselves within it. The present volume explores the concept of marginality, to whom the moniker has been applied, to whom it might usefully be applied, and how we might more meaningfully define marginality based on historical sources rather than modern assumptions. Although the volume’s geographic focus is Europe, the chapters look further afield to North Africa, the Sahara, and the Levant acknowledging that at no time, and certainly not in the Middle Ages, was Europe cut off from other parts of the globe.

1. The Space Between Borno and Palermo: Slavery and Its Boundaries in the Late Medieval Saharan-Mediterranean Region, Lori De Lucia

3. Anglo-Saxons, Evangelization, and Cultural Anxiety: The Impact of Conversion on the Margins of Europe, Jeremy DeAngelo

5. The Past and Future Margins of Catalonia: Language Politics and Catalan Imperial Ambitions in Guillem de Torroella’s La Faula, Nahir I. Otaño Gracia

8. The Marginality of Clerics’ Concubines in the Middle Ages: A Reappraisal, Roisin Cossar

9. Reviled and Revered: The Importance of Marginality in the Pastoral Care of Beguines, Tanya Stabler Miller

10. How Marginal is Marginal? Muslims in the Latin East, Ann E. Zimo

11. Pirates as Marginals in the Medieval Mediterranean World, Kathryn Reyerson

12. Marginality and Community at the Hospital of Saint-Esprit in Late Medieval Marseille, Caley McCarthy

Ann E. Zimo is Assistant Professor of Humanities at the University of New Hampshire. Her research focuses on cultural interaction in the Eastern Mediterranean at the time of the crusades.

has published articles on priests, women, and ecclesiastical regulation in Speculum, Journal of Medieval History, and Bulletin of the History of Medicine. She is currently an independent scholar as well as project manager at Beutler Ink, a digital marketing agency.

is Distinguished University Teaching Professor of History at the University of Minnesota and founding director of the Center for Medieval Studies. She has published widely on merchants and trade, and on women and gender. Her current research focuses on medieval Mediterranean piracy.

is Associate Professor of History at the University of California at Santa Barbara. Her publications explore the history of slavery and race, as well as gender and cross-cultural relations in the medieval Mediterranean.