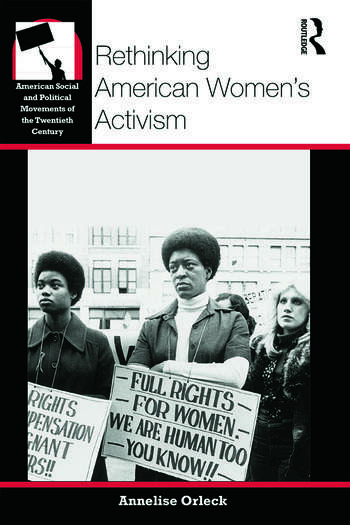 In this enthralling narrative, Annelise Orleck chronicles the history of the American women's movement from the nineteenth century to the present. Starting with an incisive introduction that calls for a reconceptualization of American feminist history to encompass multiple streams of women's activism, she weaves the personal with the political, vividly evoking the events and people who participated in our era's most far-reaching social revolutions.

In short, thematic chapters, Orleck enables readers to understand the impact of women's activism, and highlights how feminism has flourished through much of the past century within social movements that have too often been treated as completely separate. Showing that women’s activism has taken many forms, has intersected with issues of class and race, and has continued during periods of backlash, Rethinking American Women’s Activism is a perfect introduction to the subject for anyone interested in women’s history and social movements.

Prologue: Reflecting on the Wave Metaphor and the Myth of Monolithic Feminism

Chapter 1: Rethinking the So-Called First Wave - An Extremely Brief History of Women's Rights Activism in the U.S. Before 1920

Chapter 2: Civil Rights, Labor Feminism, and Mother Activism from 1920 through the 1940s

Chapter 3: Varieties of Feminism in a Conservative Age

Chapter 5: Raising Consciousness, Venting Anger, Finding Sisterhood: "The Revolution is WHat is Happening in Every Woman's Mind"

Chapter 6: Women's Movements for Redistributive and Social Justice: Other Faces of Radical Feminism

Chapter 8: Anti-Feminist Backlash and Feminism Reborn: The 1970s through 2013

Annelise Orleck is Professor of History at Dartmouth College. She is the author of Common Sense and a Little Fire: Women and Working Class Politics in the United States, 1900-1965 and Storming Caesar’s Palace: How Black Mothers Fought Their Own War on Poverty.