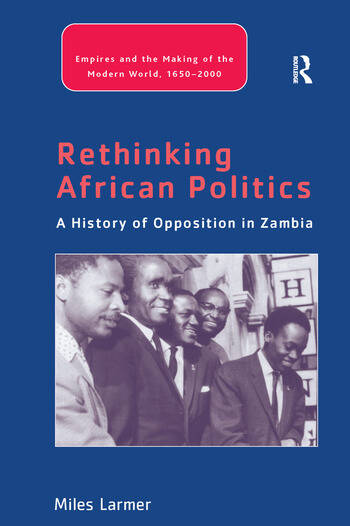 Rethinking African Politics: A History of Opposition in Zambia

In 1964 Kenneth Kaunda and his United National Independence Party (UNIP) government established the nation of Zambia in the former British colony of Northern Rhodesia. In parallel with many other newly independent countries in Africa this process of decolonisation created a wave of optimism regarding humanity's capacity to overcome oppression and poverty. Yet, as this study shows, in Zambia as in many other countries, the legacy of colonialism created obstacles that proved difficult to overcome. Within a short space of time democratisation and development was replaced by economic stagnation, political authoritarianism, corruption and ethnic and political conflict. To better understand this process, Dr Larmer explores UNIP's political ideology and the strategies it employed to retain a grip on government. He shows that despite the party's claim that it adhered to an authentically African model of consensual and communitarian decision-making, it was never a truly nationally representative body. Whereas in long-established Western societies unevenness in support was accepted as a legitimate basis for party political difference, in Zambia this was regarded as a threat to the fragile bindings of the young nation state, and as such had to be denied and repressed. This led to the declaration of a one-party state, presented as the logical expression of UNIP supremacy but it was in fact a reflection of its weakening grip on power. Through case studies of opposition political and social movements rooted in these differences, the book demonstrates that UNIP's control of the new nation-state was partial, uneven and consistently prone to challenge. Alongside this, the study also re-examines Zambia's role in the regional liberation struggles, providing valuable new evidence of the country's complex relations with Apartheid-era South Africa and the relationship between internal and external opposition, shaped by the context of regional liberation movements and the Cold War. Drawing on extensive archival research and interviews, Dr Larmer offers a ground-breaking analysis of post-colonial political history which helps explain the challenges facing contemporary African polities.

Dr Miles Larmer is Associate Professor of African History at the University of Oxford. He has written extensively on the history and politics of central and southern Africa, particularly in Zambia and the Democratic Republic of Congo. His current research focuses on the Katangese gendarmes and war in central Africa from the 1960s to the present day.

’During the past few years, Miles Larmer [...] has made a noteworthy contribution to the writing of Zambia’s post-colonial history. This important book represents the summation of his efforts so far.’ The Round Table ’... Rethinking African Politics is a welcome, thought-provoking and useful contribution to our knowledge of African opposition movements, and one that has wide-reaching significance for how we think about African history and political change. In short, Larmer's latest monograph deserves to become required reading throughout African studies.’ The Journal of Modern African Studies 'This book is highly recommended to those with political ambitions and interests, to educators, to clergy members, and to all Zambian citizens.' African Studies Quarterly 'With this book, Miles Larmer provides a welcome historical study of postcolonial politics in Zambia.' Journal of African History

Rethinking African Politics: A History of Opposition in Zambia