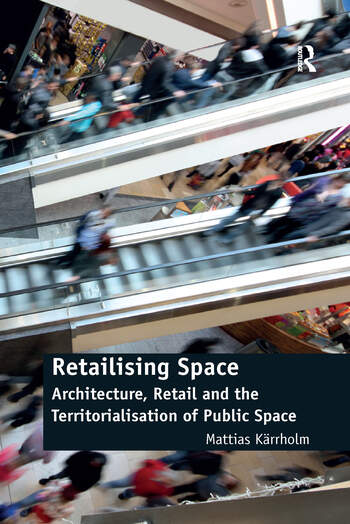 Retailising Space: Architecture, Retail and the Territorialisation of Public Space

Over the past few years there has been a proliferation of new kinds of retail space. Retail space has cropped up just about everywhere in the urban landscape: in libraries, workplaces, churches and museums. In short, retail is becoming a more and more manifest part of the public domain. The traditional spaces of retail, such as city centres and outlying shopping malls, are either increasing in size or disappearing, producing new urban types and whole environments totally dedicated to retail. The creation of these new retail spaces has brought about a re- and de-territorialisation of urban public space, and has also led to transformations in urban design and type of materials used, and even in the logic and ways through which these design amenities meet the needs of retailers and/or consumers. This book describes how the retailisation of public domains affects our everyday life and our use of the built environment. Taking an architectural and territorial perspective on this issue, it looks specifically at how retail and consumption spaces have changed and territorialised urban life in different ways. It then develops a methodology and a set of concepts to describe and understand the role of architecture in these territorial transformations.

'While, in view of their economic and social impact, retail spaces represent an important field for social studies, and while the book’s theoretical frame is constructed to best capture the nuances and critical developments of such spaces, it is important to remark, in closing, that KÃ¤rrholm’s architectural territorology - the modes of territorial production and stabilisation, the analysis of material topologies, and the notion of territorial complexity as interstitiality - could be fruitfully applied beyond the case of retail. Because of the wealth of ideas and the clarity of discussion, his noteworthy contribution should be of interest to all those studying contemporary urban spaces.' Metropolitics 'While the themes of this book may be familiar to architectural theorists focusing on urban space, it nonetheless offers social scientists an important and sophisticated elucidation of retail’s effect on the public domain in ways that in turn shape everyday life. It also puts forth a new way of thinking about the role of architecture in social life and a new vocabulary for ongoing discussion'. Urban Studies

Retailising Space: Architecture, Retail and the Territorialisation of Public Space