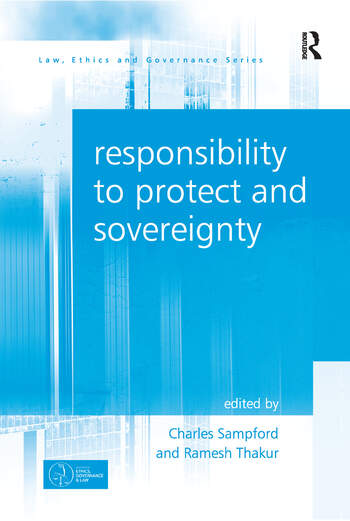 Responsibility to Protect and Sovereignty

The responsibility to protect ('R2P') principle articulates the obligations of the international community to prevent conflict occurring, to intervene in conflicts, and to assist in rebuilding after conflicts. The doctrine is about protecting civilians in armed conflicts from four mass atrocity crimes: genocide, war crimes, crimes against humanity and ethnic cleansing. This book examines interventions in East Timor, Sri Lanka, Sudan and Kosovo. The chapters explore and question UN debates with respect to the doctrine both before and after its adoption in 2005; contrasting state attitudes to international military intervention; and what takes place after intervention. It also discusses the ability of the Security Council to access reliable information and credible and transparent processes to enable it to make a determination on the occurrence of atrocities in a Member State. Questioning whether there is a need to find a closer operational link between the responsibilities to prevent and react and a normative link between R2P and principles of international law, the contributions examine the effectiveness of the framework of R2P for international decision-making in response to mass atrocity crimes and ask how an international system to deal with threats and mass atrocities can be developed in the absence of a central authority. This book will be valuable to those interested in international law, human rights, and security, peace and conflict studies.

Professor Charles Sampford topped law, politics and philosophy at Melbourne and combined those disciplines in an Oxford DPhi. He was approached to become Foundation Dean of Law at Griffith University in 1991. He led the 1998 bid for the Key Centre for Ethics, Law, Justice and Governance (the only Australian centre in law or governance to receive centre funding from the Australian Research Council) and was its Foundation Director for six years. In September 2004, he became the Director of the Institute for Ethics, Governance and Law, a joint initiative with the United Nations University, Griffith, ANU, and other universities. Foreign fellowships include Visiting Senior Research Fellow in Oxford and a Senior Fulbright to Harvard. Professor Sampford has written 117 articles and chapters and has completed 26 books and edited collections. In June 2008, his work was recognized by the ARC who invited the 20 researchers they thought had most clearly ’made a difference’ to the Graeme Clarke Outcomes Forum held at Parliament House, Canberra. Professor Ramesh Thakur is Director of the Centre for Nuclear Non-Proliferation and Disarmament, Australian National University. Educated in India and Canada, he was a professor at the University of Otago in New Zealand and then Head of the Peace Research Centre at the ANU, during which time he served as an adviser to the Australian and New Zealand governments on arms control, disarmament and international security issues. He was later Senior Vice Rector of the United Nations University (and UN Assistant Secretary-General), a Commissioner and principal author of ’The Responsibility to Protect’; principal writer of Secretary-General Kofi Annan’s second UN reform report; and professor at the University of Waterloo, Distinguished Fellow of the Centre for International Governance Innovation and Foundation Director of the Balsillie School of International Affairs in Waterloo, Ontario. The author/editor of over 40 books and 400 art

’Events from Kosovo in the 1990s to Syria today make it clear that we need a renewed focus on responding to massive threats to human life. Responsibility to Protect and Sovereignty offers a timely and focused response to policy and legal challenges and is a necessary and important read.’ Philippe Sands, University College London, UK ’As the world continues to witness mass atrocities against innocent populations, this book helps us understand the obstacles to effective life-saving interventions. It illuminates the promise of the Responsibility to Protect as a concept that can help every nation on earth fulfill its cardinal duty to protect its own citizens from genocide, war crimes, crimes against humanity and ethnic cleansing.’ Abiodun William, President, The Hague Institute for Global Justice, Netherlands

Responsibility to Protect and Sovereignty