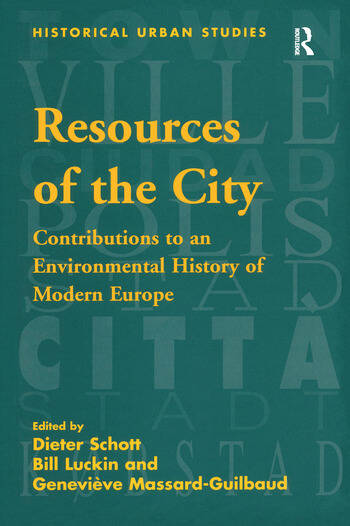 Resources of the City: Contributions to an Environmental History of Modern Europe

The field of urban environmental history is a relatively new one, yet it is rapidly moving to the forefront of scholarly research and is the focus of much interdisciplinary work. Given the environmental problems facing the modern world it is perhaps unsurprising that historians, geographers, political, natural and social scientists should increasingly look at the environmental problems faced by previous generations, and how they were regarded and responded to. This volume reflects this growing concern, and reflects many of the key concerns and issues that are essential to our understanding of the problems faced by cities in the nineteenth and twentieth centuries. Addressing a variety of environmental issues, such as clean water supply, the provision/retention of green space, and noise pollution, that faced European and North American cities the essays in this volume highlight the common responses as well as the differences that characterised the reactions to these trans-national concerns.

Dieter Schott is a Professor at the History Department of Darmstadt University of Technology, Germany. Bill Luckin is a Research Professor in Urban History at Bolton Institute, UK. Dr Geneviève Massard-Guilbaud works at the Université de Clermont-Ferrand, France.

'... this is a great book on what I hope is a rapidly emerging field.' H-NET Review ’This ground-breaking book brings together a constellation of stars in urban environmental history. Readers will recognise the authors in this collection as leaders in the field.’ Urban Studies

Resources of the City: Contributions to an Environmental History of Modern Europe