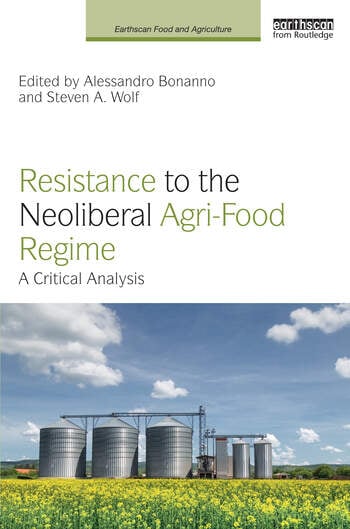 Resistance to the Neoliberal Agri-Food Regime: A Critical Analysis

This volume explores the contents, forms, and actors that characterize current opposition to the corporate neoliberal agri-food regime. Designed to generate a coherent, informed and updated analysis of resistance in agri-food, empirical and theoretical contributions analyze the relationship between expressions of the neoliberal corporate system and various projects of opposition.

Contributions included in the volume probe established forms and rationales of resistance including civic agriculture, consumer- and community-based initiatives, labor, cooperative and gender-based protest, struggles in opposition to land grabbing and mobilization of environmental science and ecological resistance. The core contribution of the volume is to theorize and to empirically assess the limits and contradictions that characterize these forms of resistance. In particular, the hegemonic role of the neoliberal ideology and the ways in which it has ‘captured’ processes of resistance are illustrated. Through the exploration of the tension between legitimate calls for emancipation and the dominant power of Neoliberalism, the book contributes to the ongoing debate on the strengths and limits of Neoliberalism in agri-food. It also engages critically with the outputs and potential outcomes of established and emerging resistance movements, practices, and concepts.

Part I: The Corporate Domination of Agri-Food

Part III: The diversity of Resistance

Conclusions: The Contradictions of Resistance to Neoliberal Agri-Food

Steven A. Wolf is Associate Professor in the Department of Natural Resources at Cornell University, New York, USA.

Resistance to the Neoliberal Agri-Food Regime: A Critical Analysis