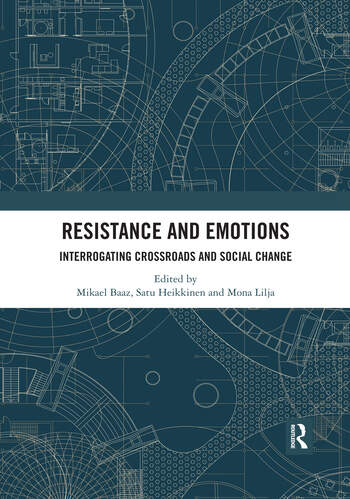 This book discusses different ways in which the cross-roads between emotions and resistance can be theorised. While the sociological field focuses primarily on emotions that are entangled in the relationship between the individual and collective, the cultural studies field has recently started to emphasise affects as a ‘rescue’ from the deterministic aspect of the poststructuralist approach (in which language decides everything) (Hemmings 2005, 2014). Scholars promoting the ‘affective turn’ argue that affects and interpretations are inseparable. By taking affects as the point of departure, it is argued that it is possible to show how bodies move in their own ways, but still in relation to others. Departing from this, it becomes interesting to explore how emotions are involved in different power relations and how they feed resistance. If we accept that emotions and interpretations are entangled and inseparable then we must investigate emotions as powerful forces of resistance.

The chapters were originally published in a special issue of the Journal of Political Power.

1. Emotions and resistance: An introduction,

2. Exploring self-loyalty in the context of social acceleration: theorising loyalties as emotions and resistance

3. Norm-critical rationality: emotions and the institutional influence of queer resistance

8. Campaigning for cooperatives as resistance to neoliberal capitalism

Mikael Baaz is an Associate Professor in International Law and an Associate Professor in Peace and Conflict Studies. He currently works as a senior lecturer in International Law at the Department of Law, University of Gothenburg, Sweden, and as an affiliated senior research fellow in Political Science at the Department of Social and Behavioural Studies, University West.

is a Senior Lecturer in Sociology at Karlstad University, Sweden. Heikkinen’s research interests are ageing, power and categorisation among others. She is currently writing about ageism and age discrimination.

is a Professor in Sociology at Karlstad University, Sweden, and a Professor in Peace and Development Studies at the School of Global Studies, University of Gothenburg, Sweden. Lilja’s area of interest is the linkages between resistance and social change as well as the particularities – the character and emergence – of various forms of resistance.