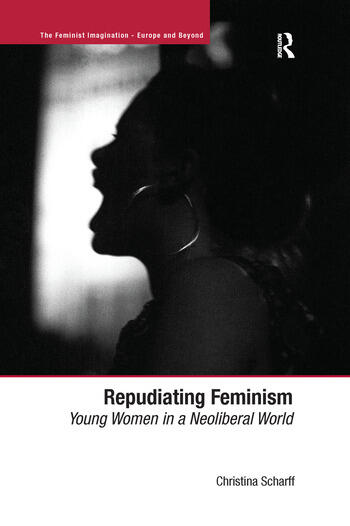 Gender equality is a widely shared value in many western societies and yet, the mention of the term feminism frequently provokes unease, bewilderment or overt hostility. Repudiating Feminism sheds light on why this is the case. Grounded in rich empirical research and providing a timely contribution to debates on engagements with feminism, Repudiating Feminism explores how young German and British women think, talk and feel about feminism. Drawing on in-depth interviews with women from different racial and class backgrounds, and with different sexual orientations, Repudiating Feminism reveals how young women's diverse positionings intersect with their views of feminism. This critical and reflexive analysis of the interplay between subjective accounts and broader cultural configurations shows how postfeminism, neoliberalism and heteronormativity mediate young women's negotiations of feminism, revealing the manner in which heterosexual norms structure engagements with feminism and its consequent association with man-hating and lesbian women. Speaking to a range of contemporary cultural trends, including the construction of essentialist notions of cultural difference and the neoliberal imperative to take responsibility for the management of one's own life, this book will be of interest to anyone studying sociology, gender and cultural studies.

'This original new book offers a compelling analysis of what is at stake when women claim or repudiate a feminist identity. Brilliantly written and insightful, Repudiating Feminism approaches phrases such as "I'm not a feminist" to explore them as performances of identity in which class, sexuality and race are deeply implicated. A major contribution to the field.' Rosalind Gill, King's College, London, UK '... an ambitious project that makes important contributions to sociological understandings of feminist (dis)identification among young women in Germany and Britain ... Repudiating Feminism is a thoroughly researched, clearly structured, and well-written examination of young German and British women’s engagement with feminism. This book applies complex theory in accessible, creative ways, making it appropriate for a broad audience across a wide range of academic disciplines.' Gender & Society 'The study’s specific focus, on the results of interviews with a total of forty women from the UK and Germany, allows for a tantalizing level of detail and a sense that the book will genuinely shed light on the nuances of why young women reject feminism. ... As well as being an important new resource in its field, Repudiating Feminism is a model of a thoughtful and responsible study of contemporary feminism that makes its points using thorough research and clear writing that resists straightforward polemic. I foresee its status as a key resource for readers seeking to understand and remedy their peers’ anti-feminist attitudes.' The Years Work in Critical and Cultural Theory 'Young women today generally feel negatively about feminism. For many, this seems so self-evident as to be scarcely worthy of investigation. Christina Scharff’s Repudiating Feminism is therefore refreshing in its willingness to subject young women’s attitudes to feminism to analytical scrutiny. Her book is not a large-N quantitative study: instead, it is a detailed qualitative analysis of the t