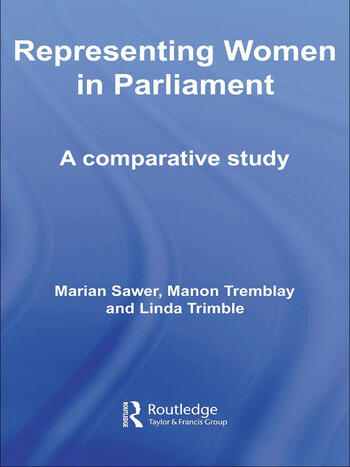 The first book-length treatment of the political representation of women in countries with parliamentary systems based on the Westminster model.

Written by a major international team of authors, this new study features twelve chapters on both new and established parliaments, including Australia, Canada, New Zealand and the United Kingdom. It tests the latest theories about women's political representation within Westminster style assemblies and is organized into three key sections that:

This new comparative study will be of great interest to students and researchers of legislative studies and of gender politics and gender studies.

Part 1: The Descriptive Representation of Women

Part 2: The Substantive Representation of Women

Marian Sawer leads the Democratic Audit of Australia at the Australian National University and chairs the Research Committee on Gender, Politics and Policy of the International Political Science Association.

Manon Tremblay is Professor of Political Science and Head of the Research Centre on Women and Politics at the University of Ottawa.

Linda Trimble is a Professor of Political Science at the University of Alberta.