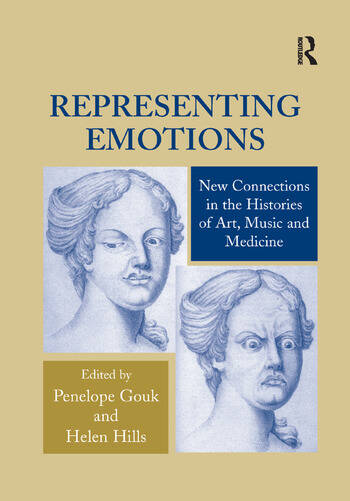 Representing Emotions: New Connections in the Histories of Art, Music and Medicine

Juxtaposing artistic and musical representations of the emotions with medical, philosophical and scientific texts in Western culture between the Renaissance and the twentieth century, the essays collected in this volume explore the ways in which emotions have been variously conceived, configured, represented and harnessed in relation to broader discourses of control, excess and refinement. Since the essays explore the interstices between disciplines (e.g. music and medicine, history of art and philosophy) and thereby disrupt established frameworks within the histories of art, music and medicine, traditional narrative accounts are challenged. Here larger historical forces come into perspective, as these papers suggest how both artistic and scientific representations of the emotions have been put to use in political, social and religious struggles, at a variety of different levels.

Contents: Introduction: Towards histories of emotions, Penelope Gouk and Helen Hills; Is there a cultural history of the emotions?, Peter Burke; Emotions into words-or words into emotions?, Graham Richards. Emotions and Religious Belief: Bodies of self-transcendence: the spirit of affect in Giotto and Piero della Francesca, Michael Schwartz; Architecture and affetti: Alberti and edification, Helen Hills; Spiritual passion and the betrayal of painting in Georges de La Tour, Dalia Judovitz; Changing emotions? The decline of Original Sin on the eve of the Enlightenment, Michael Heyd. Emotions and the Body: The man of passion: emotion, philosophy and sexual difference, Christine Battersby; A woman weeps: Hogarth's Sigismunda (1759) and the aesthetics of excess, Marcia Pointon; Remuer l'Ã¢me or plaire Ã  l'oreille? Music, emotions and the mind-body problem in French writings of the later 18th century, Christopher GÃ¤rtner. Emotions and Discipline: Music's pathological and therapeutic effects on the body politic: Doctor John Gregory's views, Penelope Gouk; The undulating self: the rhythmic conception of music and the emotions in Anglo-American evolutionary thought, Charles Brotman; Dangerous liaisons: science, amusement, and the civilizing process, Otniel E. Dror; Bibliography; Index.

Penelope Gouk, Emerita, University of Manchester. Her recent publications include Musical Healing in Cultural Contexts, and she is currently writing about changing medical explanations for music's effects between the Renaissance and Enlightenment. Helen Hills is Professor of Art History at the University of York, UK. She has published widely on seventeenth-century Italian architecture, including Invisible City: the architecture of devotion in aristocratic convents in baroque Naples, and is the editor of Architecture and the Politics of Gender in Early Modern Europe.

'Enlightenment specialists will find more riches here than I am able to describe.' Sixteenth Century Journal 'This collection of essays is an important addition to a growing body of emotion historiography. It is a broad and eclectic work, addressing the articulation and treatment of affect in western art, music and medicine between the fourteenth and twentieth centuries. Yet despite this diversity it remains coherent as a collection, being well-ordered, well-edited, and contemplative about its role in the production of histories of emotions.' Medical History

Representing Emotions: New Connections in the Histories of Art, Music and Medicine