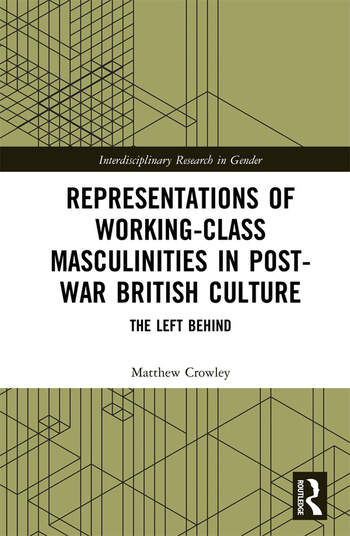 Representations of Working-Class Masculinities in Post-War British Culture: The Left Behind

This book presents an analysis of representations of white, heterosexual, working-class masculinities in British culture between 1945 and 1989 to trace the development of the sociocultural and material conditions that shaped the masculinities which are helping to shape contemporary culture.

This book seeks to fan the ‘spark of hope’ in the past that informs our present. The period which saw the establishment of the welfare state and the construction and breakdown of the post-war consensus in British politics was of great significance in the formation and maintenance of working-class masculinities and their correspondent representations. The author engages with a variety of cultural texts across various modes and media including films (Alfie), plays (Don’t Look Back in Anger), television (Boys from the Blackstuff), and music (The Beatles), and employs the analysis of the representation of working-class masculinities as a lens through which to examine a range of historical and cultural moments. This book reinstates class as a central precept in the study of British cultural representations and offers a timely intervention in ongoing debates around class and gender identities in Britain.

Conclusion: The Left Behind

Matthew Crowley is a London-based writer and researcher. He was educated at Myrtle Springs School, Sheffield, before studying at Central Saint Martins and Birkbeck College in London. Matthew was awarded his PhD from the University of Brighton.

Representations of Working-Class Masculinities in Post-War British Culture: The Left Behind