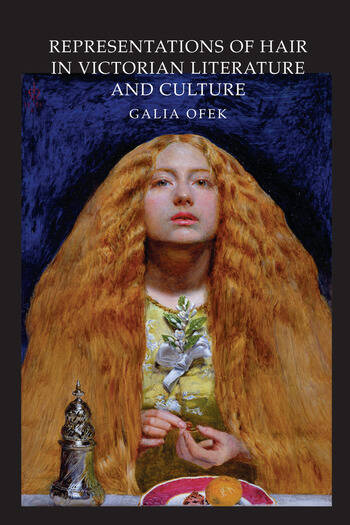 Representations of Hair in Victorian Literature and Culture

Galia Ofek's wide-ranging study elucidates the historical, artistic, literary, and theoretical meanings of the Victorians' preoccupation with hair. Victorian writers and artists, Ofek argues, had a well-developed awareness of fetishism as an overinvestment of value in a specific body part and were fully cognizant of hair's symbolic resonance and its value as an object of commerce. In particular, they were increasingly alert to the symbolic significance of hairstyling. Among the writers and artists Ofek considers are Elizabeth Gaskell, George Eliot, Margaret Oliphant, Charles Darwin, Anthony Trollope, Elizabeth Barrett Browning, Eliza Lynn Linton, Mary Elizabeth Braddon, Herbert Spencer, Dante Gabriel Rossetti, Edward Burne-Jones, Charles Dickens, Thomas Hardy, and Aubrey Beardsley. By examining fiction, poetry, anthropological and scientific works, newspaper reviews and advertisements, correspondence, jewellery, paintings, and cartoons, Ofek shows how changing patterns of power relations between women and patriarchy are rendered anew when viewed through the lens of Victorian hair codes and imagery during the second half of the nineteenth century.

Galia Ofek (B.A. Hebrew University; M. Phil, D. Phil Oxford University) teaches at the Hebrew University of Jerusalem, where she has held the Golda Meir and Lafer Postdoctoral Research Fellowships. She is currently working on a new book, The New Woman's Testament: Biblical Narratives, Allusions and Imagery in New Woman and Anti-Feminist Fiction and Journalism 1880-1915, supported by the British Academy, AHRC and ESRC.

'Lucidly written and erudite, Galia Ofek’s beautifully illustrated book is destined to be the definitive study of the Victorian obsession with hair.' Deborah Denenholz Morse, College of William & Mary, USA ’...a carefully theorized reading of hair in terms of fetishism and transgression (including Victorian concepts of the fetish as well as a post-Freudian understanding) ...’ Times Literary Supplement ’Scholars interested in Victorian literature and culture will definitely appreciate the originality of this work, and will be able to retrace the familiar paths of well-known authors and their works under an unusual, fascinating perspective.’ Rivista di Studi Vittoriani '... should appeal to all interpreters of Gaskell's rich and subtle writing, to show how her use of detail feeds into a bold alignment of criticism of social, sexual and religious intolerance.' Gaskell Journal '... an impressive body of research. [...] I would hope that [Ofek's] work helps us understand our own amused, ironic, and slightly embarrassed fascination with the many Liliths, Medusas, and Rapunzels whose uncanny images appear and reappear in Victorian literature and culture...' Pre-Raphaelite Studies '[Ofek's] finely-spun text will prove valuable to many a Victorian scholar but also to every reader interested in the culture of the period. The book is well-written, well-documented and includes a long and useful bibliography. In its overall scope and its step-by-step commentaries on individual texts (for this is where Ofek is at her best), it is both a fine piece of scholarship and an enjoyable read.' Cahiers victoriens et édouardiens 'Galia Ofek's book delivers impressively more than its quiet, albeit studious, title promises. ... The scholarship of Representations of Hair in Victorian Literature and Culture is enhanced by tens of illustrations carefully chosen and reproduced... The book is a highly informative read for Victorianists, and, due to the breadth of its theoreti

Representations of Hair in Victorian Literature and Culture