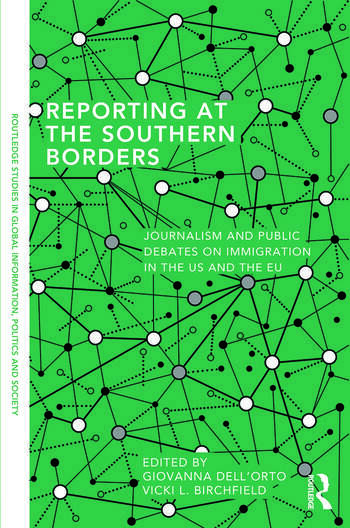 Reporting at the Southern Borders: Journalism and Public Debates on Immigration in the US and the EU

Undocumented immigration across the Mediterranean and the US-Mexican border is one of the most contested transatlantic public and political issues, raising fundamental questions about national identity, security and multiculturalism—all in the glare of news media themselves undergoing dramatic transformations.

This interdisciplinary, international volume fills a major gap in political science and communication literature on the role of news media in public debates over immigration by providing unique insider’s perspectives on journalistic practices and bringing them into dialogue with scholars and immigrant rights practitioners.

After providing original comparative research by established and emerging international affairs and media scholars as well as grounded reflections by UN and IOM practitioners, the book presents candid, in-depth assessments by nine leading European and North American journalists covering immigration from the frontlines, ranging from the Guardian’s Southern Europe editor to the immigration reporter for the Arizona Republic. Their comparative reflections on the professional, institutional and technological constraints shaping news stories offer unprecedented insight into the challenges and opportunities for 21st century journalism to affect public discourse and policymaking about issues critical to the future of the transatlantic space, making the book relevant across a wide range of scholarship on the media’s impact on public affairs.

Introduction Giovanna Dell’Orto and Vicki L. Birchfield  Part I: E.U. and U.S. Policies and Politics of Immigration Today 1. National Identity and the Challenge of Immigration; Jack Citrin  2. Policies and Politics of Immigration in the United States and the European Union; Martin A. Schain  3. Responsible Reporting and Perceptions of Migrants in an Era of Unprecedented Mobility; Anne Grobet  4. Communicating Effectively about Migration; Jean-Philippe Chauzy and Gervais Appave Part II: Comparing Immigration News Frames in the United States and Europe  5. Why Narrative Is Not Enough: Immigration and the Genres of Journalism; Rodney Benson  6. Just Off the Wire: AP’s and AFP’s Coverage of Immigration in France and the United States; Rodrigo Zamith  7. Liking Stories: Readers’ Comments on Online Immigration Articles for The New York Times and The Guardian; Anna Popkova  8. A (More) Humanitarian Take: Al-Jazeera English and Arabic Cover Immigration in the West; Stephen Bennett  Part III: Lampedusa and Schengen: Covering Immigration in Today’s Europe  9. Journalistic Strategies to Write About Immigration under Nicolas Sarkozy’s Presidency; Elise Vincent  10. Shooting Immigration for the World: International Photojournalism at Italy’s Borders; Domenico Stinellis  11. Now You See Them, Now You Don’t: Italy’s Visible and Invisible Immigrants; John Hooper  12. This is Not a Country for Immigrants: Journalists and Political Discourse in Italy; Riccardo Staglianò  Part IV: Fences and the Far West: Covering Immigration in the United States  13. The Border Beat in Battleground Arizona; Daniel González  14. Violence, Drugs and Migration in the Border of Ciudad Juarez-El Paso: The Challenges Facing Journalists; Lourdes Cárdenas  15. Investigative Reporting at Risk: The Heroes and Horrors Behind Attacks on Journalists in Mexico; Lise Olsen  16. Beyond the Far West: Translating the American Border for Italians; Guido Olimpio  17. Immigration: A Minefield for Journalists; Laure Mandeville Conclusion: Understanding Border Journalism and Its Sociopolitical Impact; Giovanna Dell’Orto and Vicki L. Birchfield

Giovanna Dell’Orto is an assistant professor at the School of Journalism and Mass Communication at the University of Minnesota and a former immigration reporter with The Associated Press (AP) in the United States and Italy. She received her Ph.D. in mass communication from the University of Minnesota.  Her AP articles have appeared in all major U.S. newspapers, including The New York Times, and in the international press, including the International Herald Tribune. Her research and teaching interests focus on the role of the news media, mediated discourses and national identity in international affairs, especially in transatlantic relations, historically and currently.

Vicki L. Birchfield is an associate professor in The Sam Nunn School of International Affairs at the Georgia Institute of Technology and director of the study abroad program on the European Union and transatlantic relations. She served as Director of the European Union Center of Excellence from 2008 to 2011, and currently co-directs the Center for European and Transatlantic Studies. Birchfield received a DES from the Graduate Institute of International Studies from the University of Geneva, Switzerland, and a Ph.D. in Political Science from the University of Georgia.  Her research and teaching specializations are European politics, the European Union, comparative politics, and international political economy. Other research and intellectual interests include the interplay of capitalism and democracy, social movements and the politics of globalization, and transatlantic relations. She has been a visiting scholar at Sciences Po, Paris and the University of Bordeaux and has been bestowed the honor of "Chevalier dans l’Ordre national du Mérite" (Knight in the National Order of Merit) by the French government.

"This most welcome book brings scholars and practitioners into a dialogue about the role of journalism and the structural, economic, ethical and logistical constraints journalists have when they treat of immigration. By discussing the way journalists’ practices shape public debates on immigration in the US and the EU, the volume illustrates the complexity of the situations and the breadth of professional skills needed to write on this subject for a large public. It will attract a large public for its attractive stories, its capacity to visibilise the invisible sides of some narratives, and its accurate explanations of the backstage of the immigration-border theater."
—Didier Bigo, King's College London

"Reporting at the Southern Borders offers a fully fleshed appraisal at why mass immigration, illegal and otherwise, remains a remarkably similar flashpoint for public opinion and policy in both the United States and Europe. It's a must read for journalists trying to tackle immigration's thorny issues and for anyone else hoping to understand one of the most vexing issues of our age."
—Dudley Althaus, Senior Correspondent of Global Post, 29-year veteran of U.S.-Mexico Border Coverage

"This timely book is a must read for anyone who wants to get beyond sound bites to truly understand immigration. Its comparative research of immigration at the southern borders of the U.S. and Europe offers a much-needed reminder that immigration is a global phenomenon, not one limited to our southwestern border. And it offers unique insights into the challenges and pressures faced by journalists tasked with covering one of the most complex and controversial issues of our time. Like the journalists' work, this book is an important addition to this vexing public policy debate."
—Rick Rodriguez, Arizona State University

"Overall, this is a sound contribution to the field of journalism studies which underpins the need for other similar works, as this is by no means an open-and-close discussion. Meanwhile, this specific book is going on top of the key readings recommended for my students as any future journalists need to think deep and hard about this subject."
—Jairo Lugo-Ocando, University of Sussex

"Giovanna Dell’Orto and Vicki L. Birchfield, with their edited volume, Reporting at the Southern Borders:Journalism and Public Debates on Immigration in the U.S. and the E.U., have made an important contribution to a growing body of literature on the topic...a timely and thoughtful look what is sure to be a defining issue of the coming century." - Moses Shumow, Florida International University, Journalism

Reporting at the Southern Borders: Journalism and Public Debates on Immigration in the US and the EU