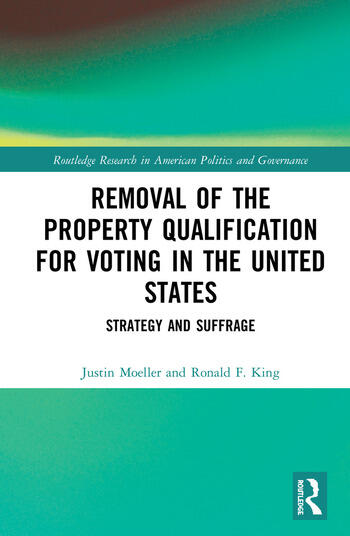 Removal of the Property Qualification for Voting in the United States: Strategy and Suffrage

In Colonial America, democracy was centered in provincial assemblies and based on the collection of neighbors whose freehold ownership made them permanent stakeholders in the community. The removal of the property qualification for voting in the United States occurred over three-quarters of a century and was among the more important events in the history of democratization, functioning to shift voting from a corporate privilege toward a human right.

Moving beyond the standard histories of property standard histories of property qualification removal, Justin Moeller and Ronald F. King adopt the theories and methods of social science to discover underlying patterns and regularities, attempting a more systematic understanding of subject. While no historical event has a single cause, party consolidation and party competition provided a necessary mechanism, making background factors politically relevant. No change in franchise rules could occur without the explicit consent of incumbent politicians, always sensitive to the anticipated impact. Moeller and King argue that political parties acted strategically, accepting or rejecting removal of the property qualification as a means of advancing their electoral position. The authors identify four different variants of the strategic calculation variable, significantly helping to explain both the temporal differences across states and the pattern of contestation with each state individually.

1. Introduction: Property, Participation, and the Routes to Reform

2. The Politics of Partisan Preemption: Pennsylvania, Georgia, and New Hampshire

7. Conclusion: The Expansion and Contraction of Democratic Rights

Justin Moeller is an Assistant Professor of Political Science at West Texas A&M, having completed his M.A. from San Diego State University in 2007 and his Ph.D. from the University of Georgia in 2012. An expert on the formal analysis of constitutional rules, his published work includes co-authored papers in American Politics Research and Public Choice.

Ronald F. King is a Professor of Political Science at San Diego State University. His advanced degrees are from Oxford and Chicago. The author of four books and more than three dozen journal articles and book chapters, Professor King has received two Fulbright awards and research grants from the American Philosophical Society, the American Council of Learned Societies, the Russell Sage Foundation, and the Twentieth Century Fund. He has been awarded the title “Profesor Onorific” by the Political Science faculty at Babes-Bolyai University in Romania.

'Justin Moeller and Ronald F. King have written by far the most searching and persuasive study of a fundamental aspect of the history of American democracy. Political parties, it turns out, were more the creators than the creation of the expanded suffrage, a proposition pertinent to recent and current politics as well as to the early national and antebellum United States. It will quickly become essential reading for anyone who wants to know how America's version of democracy came to be.'—Sean Wilentz, Princeton University, author of The Rise of American Democracy

Removal of the Property Qualification for Voting in the United States: Strategy and Suffrage