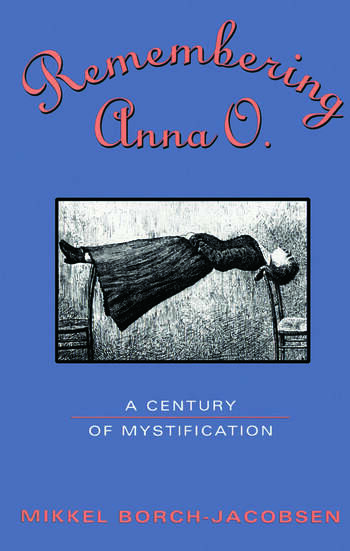 Remembering Anna O. offers a devastating examination of the very foundations of psychoanalytic theory and practice, which was born with the publication of Breuer and Freud's Studies on Hysteria in 1895. Breuer described the case of Anna O., a young woman afflicted with a severe hysteria whom he had cured of her symptoms by having her recount under hypnosis the traumatic events that precipitated her illness.

Drawing on the most recent Freud scholarship and on long-secret documents, Borch-Jacobsen demonstrates, however, that Anna O. (Bertha Pappenheim) was never cured by Breuer's "talking cure" and that both Breuer and Freud knowingly falsified the historical record. Borch-Jacobsen points out the numerous inconsistencies in Breuer's account that suggests that Anna O.'s symptoms were simulated to meet Breuer's theoretical expectations and that her famed "reminiscences" were in fact fictitious memories induced by Breuer in the course of a hypnotic treatment.

Mikkel Borch-Jacobsen is Professor of French and Comparative Literature at the University of Washington. He is the author of The Freudian Subject, Lacan: The Absolute Master and The Emotional Tie: Psychoanalysis, Mimesis, and Affect and is co-editor of the forthcoming The Past of an Illusion: Psychoanalysis and its Historians.

"This graceful and carefully researched deconstruction of the founding myth of psychoanalysis reads like a detective thriller...Mikkel Borch-Jacobsen provides an unsparing point-by-point comparison of Josef Breuer's 1882 case with Anna O. and the case history published 13 years later in 1895 of his celebrated patient. This book will appear alike to those interested in myths and legends, in the ways in which stories weave together to make history, in the rich sources of psychoanalysis in journals, letters, and case reports, and not least of all, in the treatment of women in therapy." -- Rachel T. Hare-Mustin, Haverford, PA
Hysteria's Notorious History
"Borch-Jacobsen's Remembering Anna O. is an example of "the new Freud Studies" -scholarly academic explorations which for the most part come to bury psychoanalysis rather than praise it." -- The San Francisco Jung Institute Library Journal
"In a closely argued and well-documented book, he demonstrates that almost everything beloved by psychoanalysts about the case of Anna O. is false...Remembering Anna O. takes the myth to pieces piont by point." -- Stuart Sutherland, University of Sussex THES
"This quasi-anonymity, no doubt the fruit of judicious appeal to medical professional confidentiality, produced the original fiction in the procession of "case histories" which were to entrance the readers of psycho-analytic literature." -- Canadian Review of Comparative Literature
"Because of the book's scope and its correction of the factual record, Remembering Anna O. is a valuable contribution to the small body of critical literature about her case." -- American Scientist
"...a groundbreaking new book..." -- New York Review of Books
"Borch-Jacobsen...maintains that the case is a myth and offers persuasive evidence in support of his heresy. His book is an entertaining exercise in irreverent detection, regardless of one's position on Freud." -- Atlantic Monthly
"[Borch-Jacobsen] writes an effective expose that reads like a detective story. It sparkles with light and heat... [It is] valuable in the ongoing effort to undetstand how and why Freud became one of the greatest influences of our century." -- Library Journal
"...groundbreaking new book." -- The New York Review
"These are illuminating findings about the prehistory of psychoanalysis." -- John Gedo, University of Chicago