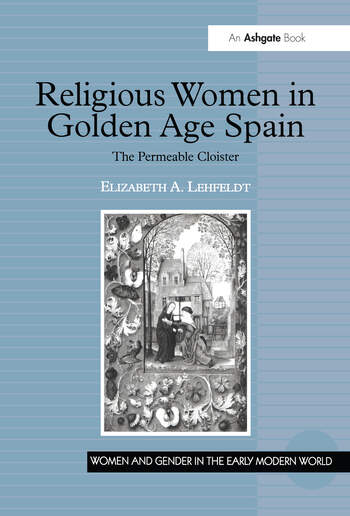 Through an examination of the role of nuns and the place of convents in both the spiritual and social landscape, this book analyzes the interaction of gender, religion and society in late medieval and early modern Spain. Author Elizabeth Lehfeldt here examines the tension between religious reform, which demanded that all nuns observe strict enclosure, and the traditional identity of Spanish nuns and their institutions, in which they were spiritually and temporally powerful women. Lehfeldt's work is based on the archival records of twenty-three convents in the city of Valladolid, and peninsula-wide documents that include visitation records, the constitutions of religious orders, and spiritual biographies. Religious Women in Golden Age Spain is the first book-length study in English to pose this chronological and conceptual framework for identifying and analyzing the role of nuns and convents in late-medieval and early-modern Spanish society.

Contents: Introduction: A convent, a bishop, and a town; Bound together in community: convents and their patrons; Blurring the boundaries: the significance of convents as estate managers; Litigious behavior: convents and lawsuits; A carpenter resisted: convents and late Medieval monastic reform; Habits of reform: religious women before Trent; The cloister and the world; Conclusion; Bibliography; Index.

'Well-written and persuasive ... makes a significant contribution to the fields of Spanish history, social history of religion, and women’s history. Lehfeldt's account of nuns' involvement in the very worldly activities of managing estates and utilizing the legal system to assert rights over finances and property ... gives us a more balanced view of nuns in their varied roles in society.' Jodi Bilinkoff, Associate Professor of History, University of North Carolina at Greensboro ’... depicts the often contentious interdependency of nuns and secular society. ... Meticulously researched and lucidly presented, Religious Women in Golden Age Spain greatly enhances our understanding of the complexity of women’s agency within the contours of late medieval and early modern monasticism.’ Alison Weber, author of Teresa of Avila and the Rhetoric of Femininity 'This is an important book because not only is it deeply rooted in wide-ranging manuscript research together with a clear understanding of existing secondary reading, but also it cuts new ground for historians of women religious in the early modern period.' Historians of Women Religious of Britain and Ireland ’...Elizabeth A. Lehfeldt’s Religious Women in Golden Age Spain (published through the Ashgate series on ’Women and Gender in the Early Modern World’) is an impressive contribution to recent studies on the relationship between nuns and the world outside the cloister. ... What I like best about this dense and exhaustive study is the sense that the author has pulled back the curtains of the convent faÃ§ade to reveal the inner workings of a business vital to multiple constituencies (complete with its power brokers), ultimately working to support the ideals of spiritual contemplation.’ Bulletin of Spanish Studies