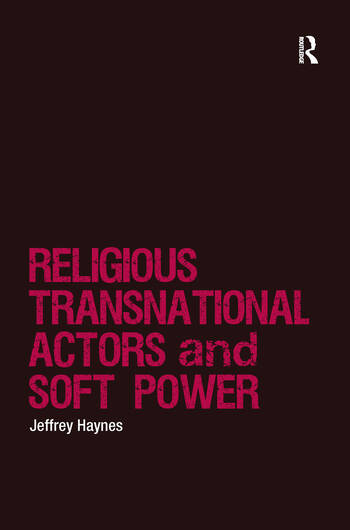 Haynes looks at religious transnational actors in the context of international relations, with a focus on both security and order. With renewed scholarly interest in the involvement of religion in international relations, many observers and scholars have found this move unexpected because it challenges conventional wisdom about the nature and long-term historical impact of secularisation. The 'return' of religion to international relations necessarily involves deprivatisation. Recent challenges to international security and order emanate from various entities, notably 'extremists', people often said to be 'excluded' from the benefits of globalisation for reasons of culture, history and geography. This study looks at the dynamics of this new religious pluralism as it influences the global political landscape. Several specific transnational religious actors are examined in the chapters including: American Evangelical Protestants, Roman Catholics, the Organisation of the Islamic Conference, Sunni extremist groups (al Qaeda and Lashkar-e-Taiba), and Shia transnational networks. While varying widely in what they seek to achieve, they also share an important characteristic: each seeks to use religious soft power to advance their interests. In sum, these religious transnational actors all wish to see the spread and development of certain values and norms, which impact on international security and order.

'This important book addresses the paradox of how transnational religious actors, lacking the military or economic resources of states or transnational corporations, have managed to impact the contemporary world in such unexpected and contradictory ways. Even 9/11, the most symbolically devastating demonstration of this impact, is shown - despite the appalling raw violence involved - to be an attempt to exercise "soft power".' John T.S. Madeley, London School of Economics and Political Science, UK 'Deploying Joseph Nye's notion of "soft power" and applying it to the activities of religious transnational actors, Jeff Haynes provides a comprehensive and balanced account of their impact on international relations. This book will be welcomed by all those working on religion and politics.' Giorgio Shani, International Christian University, Japan 'Jeffrey Haynes’ Religious Transnational Actors and Soft Power is a serious unpacking of the role of religion in contemporary international relations... One of the most attractive aspects of the book is that Haynes does not over-sell the claims of religious soft power. He notes, for example, what we might be seeing is a congruence between foreign policy and religious actors rather than something more profound that indicates a foreign policy driven by overt religiosity. This conceptual and analytical modesty makes the work more convincing.' The Round Table