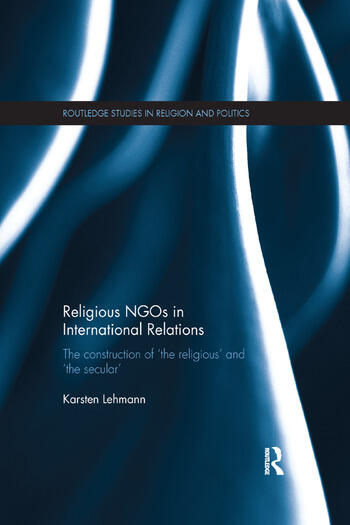 Religious NGOs in International Relations: The Construction of 'the Religious' and 'the Secular'

Over the last 30 years, non-governmental organizations (NGOs) have become increasingly present in international discourses and ​active in international decision-making. Among the estimated several million NGOs in existence today, an increasingly visible number of organizations are defining themselves in religious terms – referring to themselves as "religious", "spiritual", or "faith-based" NGOs. This book documents the initial encounters between the particularly international segment of those organizations and the UN while at the same time covering the Protestant and Catholic spectrum that dominated the early years of their activities in the UN-context.

This book focuses on the construction of the human rights discourse inside two religiously affiliated organizations: The Commissions of the Churches on International Affairs (CCIA) and Pax Romana (IMCS / ICMICA). These organizations have been formally accredited as NGOs by the UN, label themselves as religious, and look back upon a long and intense cooperation with the UN. Lehmann presents material from the archives of those two organizations that has so far rarely been used for academic analysis. In doing so, as well as documenting the encounters between those organizations and the UN, and looking at the Protestant and Catholic spectrum, the book provides new insights into the very construction of the notions of ‘the religious’ and the ‘secular’ inside those organizations.

1. Looking into the black Box of religiously affiliated Organizations  2. Resurgence Debates, revisited  3. Methodical and methodological Layout of the Analyses  4. Religions and human Rights in the Context of the UN  5. Commission of the Churches on International Affairs (CCIA)  6. Pax Romana (ICMICA / IMCS)  7. Worldwide Trend towards Activism  8. A Re-Evaluation of the Resurgence Debates

Karsten Lehmann is a scholar of the Academic Study of Religions as well as Sociology of Religions. He currently works as Head of Social Sciences and Statistics at the International Centre for Interreligous and Intercultural Dialogue in Vienna, Austria.

'This book approaches absolutely key themes, such as the supposed privatization of religion and its 'resurgence' (or greater visibility) of recent years. Dealing with religious NGOs in relation to the UN, Lehmann focuses on the absorption of human rights discourses, originally regarded as secular, by two key NGOs – Pax Romana and the World Council of Churches. This provides fascinating and empirically based new insights into some of the most central discussions in the study of religions.' - David Martin, Prof. em. London School of Economics and Political Science, UK

'From a completely new angle, the present book helps to better understand the public role of religions in international politics, and will add significantly to the study of religions as well as international relations. Lehmann approaches these themes by focusing on two developments: One is the impact accredited religious organizations have on the politics of the UN. But even more significantly, Lehmann focuses on the flip side of these processes: the impact the activities of these RNGOs have on the religious communities they represent. Along those lines, the book helps to better understand in which ways globalization has changed the core institutions and functions of the Nation-State; and to what extent public services – such as education, medical care, welfare, and even security – are transferred to religiously affiliated actors.' - Hans G. Kippenberg, Prof. em. Bremen University, Germany

'Lehmanns’ intriguing book is based on years of thoroughly conducted empirical research. Studying thousands of documents in different archives around the world allows him to reconstruct pivotal communication processes behind the front stage of international politics and religion between the 1940s and the 1970s. By digging deep into areas mostly hidden behind the public scenes of debates on religious freedom, his fascinating book uncovers the backstage of what is referred to as the ‘return of religion’ to the public sphere. Undoubtedly, this book is a must for any scholars seriously interested in contemporary religion and the changes it has undergone over the past decades.' - Bernt Schnettler, Prof. Bayreuth University, Germany

'This book brings a rare and enlightening historical perspective to the question of religious NGOs at the UN and in the process repositions our understanding of some of the most complex debates around the question of the religious-secular and the resurgence of religion. Its achievement is greater for the way it bridges different methodologies across the social sciences and humanities and incisively takes studies of transnational religious actors to a new critical understanding. This book will be a milestone in the fascinating new examination of religious NGOs at the United Nations, not least for the way it unravels and makes us rethink the dynamics of how religious groups adjust and respond to a changing political world.' - Jeremy Carrette, Prof. University of Kent, UK

'The book ‘Religious NGOs in International Relations’ offers an important historical and sociological contribution to understanding better both the role of two early Protestant and Catholic Religious NGOs in relation to the development of human rights discourse within the early years of the UN as well as the significance of the analysis of these organizations for nuancing the debate about the so-called 'resurgence' of religions in the public space – in particular in terms of the complex constructions of the interdependent notions of the 'religious' and the 'secular' over the last few decades.' - Patrice Brodeur, Prof. Université de Montréal, Canada

Religious NGOs in International Relations: The Construction of 'the Religious' and 'the Secular'