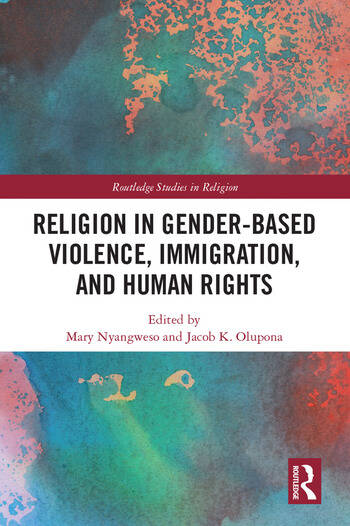 This book builds on work that examines the interactions between immigration and gender-based violence, to explore how both the justification and condemnation of violence in the name of religion further complicates our societal relationships. Violence has been described as a universal challenge that is rooted in the social formation process. As humans seek to exert power on the other, conflict occurs. Gender based violence, immigration, and religious values have often intersected where patriarchy-based power is exerted on the other.

An international panel of contributors take a multidisciplinary approach to investigating three central themes. Firstly, the intersection between religion, immigration, domestic violence, and human rights. Secondly, the possibility of collaboration between various social units for the protection of immigrants’ human rights. Finally, the need to integrate faith-based initiatives and religious leaders into efforts to transform attitude formation and general social behavior.

This is a wide-ranging and multi-layered examination of the role of religion in gender-based violence and immigration. As such, it will be of keen interest to academics working in religious studies, gender studies, politics, and ethics.

2 The Rights, Our Rights: A Critical Response to Homosexuality and Violence in Nigeria

4 Gendered Oppression and Sanctions within African Initiated Churches in Europe: The Case of Amsterdam

5 The Paradox of Cultures: Violence against women and the German immigration debate before and after New Year’s Eve 2015 in Cologne

6 Cultures in Contrast: LGBTQ Movements and Post-Soviet Religious Resurgence in the Republic of Georgia

7 Religion, Gender-Based Violence and the Rights of the Girl Child in Kenya

8 Religion, Culture, and Family Violence among the Yoruba of Nigeria

9 Gender-Based Violence: The Case of the Babukusu of Bungoma Kenya

10 Religion and Reproductive Health in Africa: An Exploration of Christian Ethics with a Focus on Abortion

12 A Critical Engagement of Botho/Ubuntu and Mt. 25:35 in the Debate of the Provision of ARV’s to cross-border migrants in Botswana

13 The Horror or Honor Killings – An Indian Experience: A Case study of Rizwanur Rahman and Priyanka Todi

14 The Question of Healing and Forgetting: Disturbing Realities in Short Stories of Ritu Menon and Uravashi Bhutalia

15 Immigration and Gender-Based Violence in the West

16 From Africa to America: Religio-cultural Influence on Nigerian Immigrants in a Foreign Land

17 Clerics and Community Based Organizations as Agents of Social Change

Mary Nyangweso is Associate Professor and J. Woolard and Helen Peel Distinguished Chair in Religious Studies at East Carolina University, Greenville, North Carolina, USA. She is the author of Female Genital Cutting: Mutilation or Cultural Right? (2014) and Female Circumcision: the Interplay Between Religion, Gender, and Culture in Kenya (2007).

is Professor of African Religious Traditions, Harvard Divinity School and Professor of African and African American Studies in the Faculty of Arts and Sciences at Harvard University, USA. He is the author of several books, including City of 201 Gods: Ilé-Ifè in Time, Space, and the Imagination (2011).