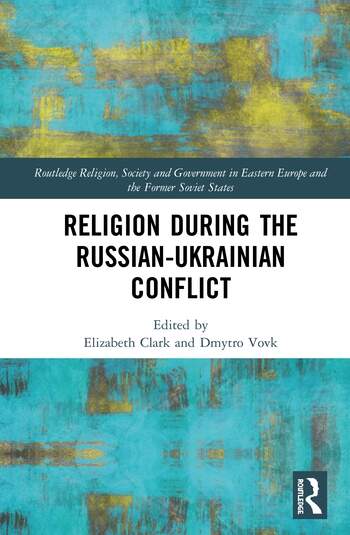 Religion During the Russian Ukrainian Conflict

This book investigates how the military conflict between Russia and Ukraine has affected the religious situation in these countries. It considers threats to and violations of religious freedom, including those arising in annexed Crimea and in the eastern part of Ukraine, where fighting between Ukrainian government forces and separatist paramilitary groups backed and controlled by Russia is still going on, as well as in Russia and Ukraine more generally. It also assesses the impact of the conflict on church-state relations and national religion policy in each country and explores the role religion has played in the military conflict and the ideology surrounding it, focusing especially on the role of the Ukrainian and Russian Orthodox churches, as well as on the consequences for inter-church relations and dialogue.

1. Introduction, Elizabeth A. Clark and Dmytro Vovk  Part 1. Religion, politics and law.  2. Civil religion and religious freedom in the Russian-Ukrainian conflict, Elizabeth A. Clark  3. Dynamics of church-state relations in Ukraine and the military conflict with Russia: Political and legal aspects, Dmytro Vovk  4. Come all ye faithful to the Russian World: Governmental and grass-roots spiritual discourse in the battle over Ukraine, Elizaveta Gaufman  5. Alternative spiritualities in Russia during the conflict in Ukraine, Stanislav Panin  6. The United States International Religious Freedom Act, nonstate actors, and the Donbas crisis, Robert C. Blitt  Part 2. Impact of the Russian-Ukrainian conflict on religious public life and communities. 7. Ukrainian churches and civil society in the Euromaidan and the Russian-Ukrainian conflict: A sociological analysis, Viktor Stepanenko  8. A spatial analysis of religious diversity and freedom in Ukraine after the Euromaidan, Tymofiy Brik and Stanislav Korolkov  9. Changes to religious life in Crimea since 2014, Roman Lunkin  Part 3. The Russian-Ukrainian conflict and inter-Orthodox relations.  10. History, ecclesiology, canonicity, and power: Ukrainian and Russian Orthodoxy after the Euromaidan, Jerry G. Pankhurst  11. The cause of Ukrainian autocephaly, Cyril Hovorun  12. Equivocal memory: What does the Ukrainian Orthodox Church of the Moscow Patriarchate remember? Andriy Fert  Part 4. Interviews.  13. "The Orthodox identification of militants is an element of their understanding of the Russkiy mir": Interview with Dr. Ihor Kozlovsky.  14. "The militants used the Bibles to keep fires going and to cook food": Interview with Rev. Dr. Vitaly Sorokun.  15. Persecutions of Jehovah’s Witnesses in Russia: Interview with Maria Kravchenko.  Index

Elizabeth A. Clark is the Associate Director of the International Center for Law and Religion Studies at the J. Reuben Clark Law School at Brigham Young University, Provo, Utah.

Dmytro Vovk is an Associate Professor and Director for the Center for Rule of Law and Religion Studies at Yaroslav the Wise National Law University, Kharkiv, Ukraine.

Religion During the Russian Ukrainian Conflict