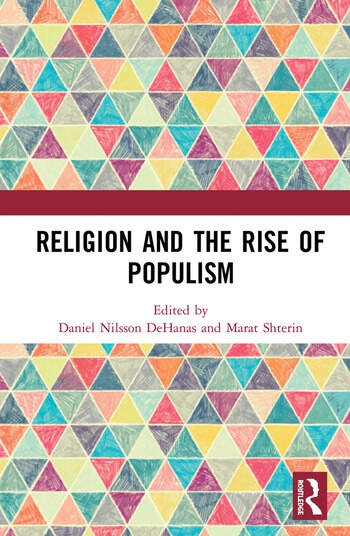 Religion and the Rise of Populism

Populism is on the rise around the world. Since 2016, with the US presidential election and the Brexit debate in the UK, populism has taken a central place in global discussions on democracy. This book aims to correct the oversight that, although religion has played a key role in populism in many countries, it has been curiously neglected in recent academic debates.

The authors use case studies from around the world to provide global insights into this issue. The first part of the book focuses on the West, with authors exploring the important role of Anglican voters in the Brexit referendum; rural and pre-millennialist American support for Donald Trump; and the rise of political rhetoric on Muslims in Germany, Switzerland, and Austria. The book then moves beyond the West to consider leaders and political parties in Turkey, Macedonia, Greece, Kyrgyzstan, and Kazakhstan. The authors consider varied populist types, from more established ‘ruling populists’ to young upstart movements.

This wide-ranging volume redefines the concept of populism as a political style that sets a ‘sacred people’ apart from its enemies, providing a timely yet grounded account that will stimulate further research and public debate. It was originally published as a special issue of the journal Religion, State & Society.

1. Introduction: Religion and the rise of populism

2. How religion came into play: ‘Muslim’ as a category of practice in immigrant integration debates

3. Religion and Brexit: populism and the Church of England

4. Thank God for the greatest country on earth: white supremacy, vigilantes, and survivalists in the struggle to define the American nation

5. The impulse to orthodoxy: why illiberal democracies treat religious pluralism as a threat

6. The populist breeding ground and religion: the case of the Greek mainstream and Radical Right

7. Co-opting religion: how ruling populists in Turkey and Macedonia sacralise the majority

is Senior Lecturer in Political Science and Religion at King’s College London, UK, and co- editor of the journal Religion, State and Society.

is Reader in Sociology of Religion at King’s College London, UK, and co-editor of the journal Religion, State and Society.

'...regarded as an open-ended introduction to the highly diverse field of contemporary occulture the volume offers inspirational reading. Besides the Introduction and Conclusion chapters, written by the editors, the volume contains no less than 20 pieces, covering a wide range of subjects related to the paranormal and/or to (Western) occulture, by more than 20 different authors.

...The Paranormal and Popular Culture can be valuable to any scholar interested in contemporary occulture. Several of the chapters are what a non-academic would probably call nerdy, showing deep knowledge about their often very narrow topics, resulting in texts that are highly interesting and fascinating.'

Religion and the Rise of Populism