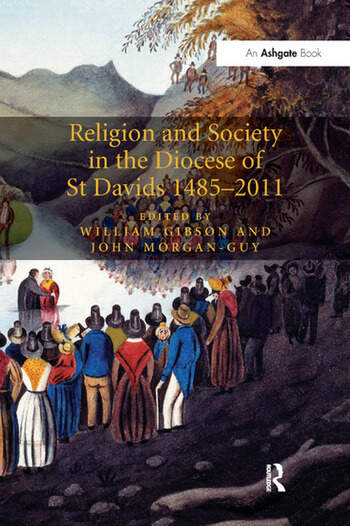 During the medieval and early modern periods the Welsh diocese of St Davids was one of the largest in the country and the most remote. As this collection makes clear, this combination of factors resulted in a religious life which was less regulated and controlled by the institutional forces of both Church and State. Addressing key ideas in the development of popular religious culture and the stubborn continuity of long-lasting religious practices into the modern era, the volume shows how the diocese was also a locus for continuing major religious controversies, especially in the nineteenth century. Presenting a fresh view of the Diocese of St Davids since the Reformation, this is the first new account of religion and society in over a century. It is, moreover, not one which is written primarily from an institutional perspective but from that of wider society. As well as a chronological treatment, giving an overview of the history of religion in the diocese, chapters address key themes, including a study of religious revivals which originated within the borders of the diocese; consideration of popular and elite education, including the contribution of Bishop Burgess's pioneering institution at Lampeter (the first degree awarding institution in England and Wales after Oxford and Cambridge); the relationship of the Church to the revival of Welsh cultural identity; and new reflections on the agitation and realisation of disestablishment of the Church as it affected Wales. As such, this pioneering study has much to offer all those with an interest, not only in Welsh history, but ecclesiastical history more broadly.

Professor William Gibson is Professor of Ecclesiastical History at Oxford Brookes University and Director of the Oxford Centre for Methodism and Church History. His most recent publications are The Church of England 1689-1832: Unity and Accord, (2001); The Enlightenment Prelate: Benjamin Hoadly 1676-1761, (2004); James II and the Trial of the Seven Bishops (2009) and the Oxford Handbook of the British Sermon 1689-1901 (2012) He has extensive experience of editorial work and managing collections of essays, including joint editorship of Religious Identities in Britain, 1660-1832, (with Robert Ingram, Ashgate, 2005); Politics, Religion and Dissent: 1660-1832, edited jointly with Robert Cornwall (Ashgate, 2010) and is book reviews editor for Archives, the journal of the British Records Association. He is co-editor of Wesley and Methodist Studies. He is a fellow of the Royal Historical Society and of the Royal Society of Arts. Dr John Morgan-Guy was from 2005-8 the Arts & Humanities Research Council Research Fellow in the department of Theology and Religious Studies at University of Wales, Lampeter (now University of Wales Trinity St David). He is currently a Lecturer in Theology and Church History in the same department, and an Honorary Research Fellow of the University. He is a Fellow of the Royal Historical Society and a Fellow of the Royal Society of Medicine. From 1999-2004 he was a Research Fellow at the University of Wales’ Centre for Advanced Welsh and Celtic Studies at Aberystwyth, collaborating with the art historian Peter Lord on the major research project ’The Visual Culture of Wales’. He is the author of numerous books and articles on ecclesiastical and medical history, and has contributed to publications in the field of visual culture.

’This is history at its best - it’s local yet set against the broad backdrop of national and international developments. It offers an impressive accumulation of detail without losing sight of the bigger picture. And its imposing range of contributors, under the watchful eye of its editors, avoid the usual jumpiness of such volumes and manage to produce a silky smooth text that is at once instructive and compelling.’ Lord Griffiths of Burry Port, Superintendent Minister of Wesley's Chapel, London, UK ’William Williams, the hymn writer, once compared the outbreak of the Methodist revival in the mid 1730s to the dawning of the sun after a long dark winter’s night. One hopes that Christians today will be inspired by this record of the success of the gospel in our diocese in previous generations, and pray that the same sun will shine once more upon us.’ Pobl Dewi