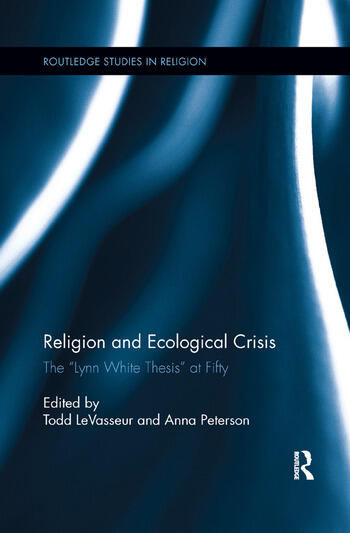 Religion and Ecological Crisis: The “Lynn White Thesis” at Fifty

In 1967, Lynn White, Jr.’s seminal article The Historical Roots of Our Ecologic Crisis was published, essentially establishing the academic study of religion and nature. White argues that religions—particularly Western Christianity—are a major cause of worldwide ecological crises. He then asserts that if we are to halt, let alone revert, anthropogenic damages to the environment, we need to radically transform religious cosmologies. White’s hugely influential thesis has been cited thousands of times in a variety of disciplines, including but not limited to religious studies, environmental ethics, history, ecological science, philosophy, psychology, and anthropology.

In practical terms, the ecological crisis to which White was responding has only worsened in the decades since the article was published. This collection of original essays by leading scholars in a variety of interdisciplinary settings, including religion and nature, environmental ethics, animal studies, ecofeminism, restoration ecology, and ecotheology, considers the impact of White’s arguments, offering constructive criticism as well as reflections on the ongoing, ever-changing scholarly debate about the way religion and culture contribute to both environmental crises and to their possible solutions. Religion and Ecological Crisis addresses a wide range of topics related to White’s thesis, including its significance for environmental ethics and philosophy, the response from conservative Christians and evangelicals, its importance for Asian religious traditions, ecofeminist interpretations of the article, and which perspectives might have, ultimately, been left out of his analysis. This book is a timely reflection on the legacy and continuing challenge of White’s influential article.

2. Lynn White Jr.’s ‘The Historical Roots of Our Ecologic Crisis’ after Fifty Years

3. The Historical Roots of Environmental Philosophy

4. Sinners in the Hands of an Ecological Crisis: Lynn White's Environmental Jeremiad

5. Lynn White Jr. Right and Wrong: The Anti-Ecological Character of Latin Christianity, and the Pro-Ecological Turn of Protestantism

7. Lynn White Jr., One Catalyst in the Historical Development of Spiritual Ecology

10. The Challenges of Worldview Transformation: ‘To Rethink and Refeel our Origins and Destiny’

11. Gender and Genesis: Religion, Secular Science, and the Project of Power and Control

12. A Lens, a Path, a Return Journey—Lynn White and the Question of Animal Protection

13. What’s Left (Out) of the Lynn White Narrative?

14. Therefore the Winds: Some Thoughts on the ‘Roots’

Todd LeVasseur is a Visiting Assistant Professor at the College of Charleston in South Carolina, in the Religious Studies Department, and he is currently Program Director of Environmental Studies. He has published numerous articles and chapters on topics including climate change, sustainability, radical environmentalism, sustainable agriculture, and ecolinguistics. He is lead editor for a forthcoming book from the University Press of Kentucky titled Religion and Sustainable Agriculture: World Spiritual Traditions and Food Ethics.

is professor in the Department of Religion at the University of Florida. She received her PhD from the University of Chicago Divinity School and her AB from the University of California at Berkeley. Her research interests are in religion and social change, especially in Latin America; environmental and social ethics; and the place of animals in environmental thought. She has published a number of articles, chapters, and books, including Being Human: Ethics, Environment, and Our Place in the World (2001), Everyday Ethics and Social Change: The Education of Desire (2009) and Being Animal: Beasts and Boundaries in Nature Ethics (2013). Presently she is working on two research projects: on one the place of practice in ethical theory and another on the companion animal rescue movement.

Religion and Ecological Crisis: The “Lynn White Thesis” at Fifty