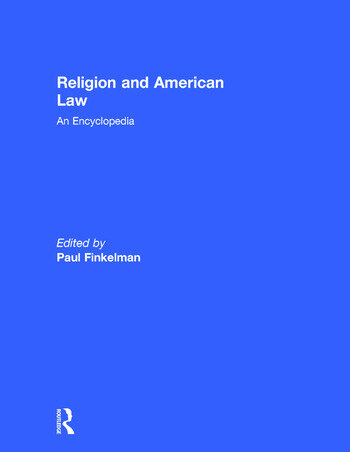 Religion and American Law: An Encyclopedia

First published in 2000. Routledge is an imprint of Taylor & Francis, an informa company.

Paul Finkelman is the John Seiberling Professor of Constitutional Law at the University of Akron College of Law. He has written or edited more than a dozen books and more than sixty scholarly articles and lectured on American Constitutional law throughout the United States as well as in Europe and South America.

"This primer and dictionary of a topic of increasing interest to both general readers and lawyers will be useful for a broad audience...Recommended for undergraduate and graduate libraries." -- Choice
"[An] excellent reference tool." -- Church and Synagogue Libraries
"Religion and American Law is a remarkable achievement. The only work of its kind, it comprehensively describes and analyzes the important cases and legal controversies surrounding church and state, and the relationship between them. A distinguished group of authors contributed to the book, including many of America's leading law professors, historians and practicing attorneys. The quality and scope of Religion and American Law make it a unique resource, indispensable to students and scholars of law, religion and history seeking clear, authoritative guidance in this area." -- Gabriel J. Chin, University of Cincinnati College of Law
"The writing, by 96 different contributors, is uniformly clear, consistent, and coherent... Very highly recommended for all libraries." -- American Reference Books Annual
"Paul Finkelman, one of the nation's premier constitutional legal historians, has put together a work that is not only exceptionally useful but fascinating as well. The articles are short enough for encyclopedic-type reference yet capture the color, richness, and complexity of their topics." -- Carl T. Bogus, Roger Williams University School of Law
"Finkelman's book is an extremely useful reference work on a timely, controversial, and vitally important topic in American constitutional law. It is remarkably thorough, and filled with insightful analysis by a distinguished group of contributors. It pulls off admirably the most difficult aspect of the encyclopedist's art: elucidating a difficult subject concisely, without sacrificing comprehensiveness, complexity, or clarity. The book will make a valuable addition to any legal collection." -- James A. Gardner, Western New England College
"This timely volume from the reputable Garland Reference Library of Humanities series is an alphabetically arranged encyclopedia, carefully edited and authoritatively written...recommended for academic and large public library reference collections." -- Booklist/RBB

Religion and American Law: An Encyclopedia