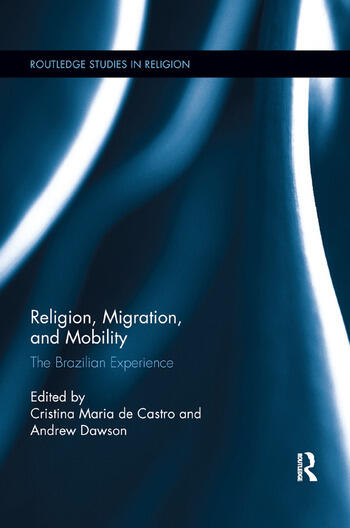 Focusing on migration and mobility, this edited collection examines the religious landscape of Brazil as populated and shaped by transnational flows and domestic migratory movements. Bringing together interdisciplinary perspectives on migration and religion, this book argues that Brazil’s diverse religious landscape must be understood within a dynamic global context. From southern to northern Europe, through Africa, Japan and the Middle East, to a host of Latin American countries, Brazilian society has been influenced by immigrant communities accompanied by a range of beliefs and rituals drawn from established ‘world’ religions as well as alternative religio-spiritual movements. Consequently, the formation and profile of ‘homegrown’ religious communities such as Santo Daime, the Dawn Valley and Umbanda can only be fully understood against the broader backdrop of migration.

Contributors draw on the case of Brazil to develop frameworks for understanding the interface of religion and migration, asking questions that include: How do the processes and forces of re-territorialization play out among post-migratory communities? In what ways are the post-transitional dynamics of migration enacted and reframed by different generations of migrants? How are the religious symbols and ritual practices of particular worldviews and traditions appropriated and re-interpreted by migrant communities? What role does religion play in facilitating or impeding post-migratory settlement? Religion, Migration and Mobility engages these questions by drawing on a range of different traditions and research methods. As such, this book will be of keen interest to scholars working across the fields of religious studies, anthropology, cultural studies and sociology.

2 Christian Religiosity among Arabs in Brazil: Challenges Past and Present

6 Religion and Life among Armenian Brazilians

9 From Brazil to the World: The New Christian Missionaries

10 Forest, City, and World: The Regional and Global Expansion of Santo Daime

Cristina Maria de Castro is Professor of Sociology of Religion at the Federal University of Minas Gerais, Brazil.

is Professor of Modern Religion in the Department of Politics, Philosophy and Religion at Lancaster University, UK.