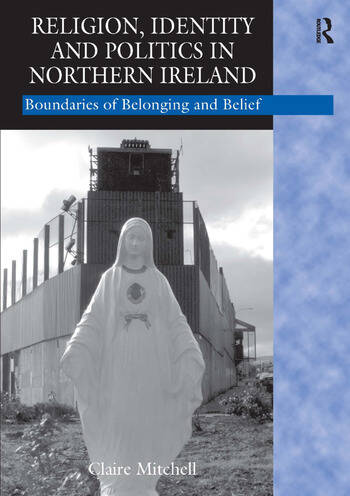 Religion, Identity and Politics in Northern Ireland: Boundaries of Belonging and Belief

Has conflict in Northern Ireland kept political dimensions of religion alive, and has religion played a role in fuelling conflict? Conflict in Northern Ireland is not and never will be a holy war. Yet religion is more socially and politically significant than many commentators presume. In fact, religion has remained a central feature of social identity and politics throughout conflict as well as recent change. There has been an acceleration of interest in the relationship between religion, identity and politics in modern societies. Building on this debate, Claire Mitchell presents a challenging analysis of religion in contemporary Northern Ireland, arguing that religion is not merely a marker of ethnicity and that it continues to provide many of the meanings of identity, community and politics. In light of the multifaceted nature of the conflict in Northern Ireland, Mitchell explains that, for Catholics, religion is primarily important in its social and institutional forms, whereas for many Protestants its theological and ideological dimensions are more pressing. Even those who no longer go to church tend to reproduce religious stereotypes of 'them and us'. Drawing on a range of unique interview material, this book traces how individuals and groups in Northern Ireland have absorbed religious types of cultural knowledge, belonging and morality, and how they reproduce these as they go about their daily lives. Despite recent religious and political changes, the author concludes that perceptions of religious difference help keep communities in Northern Ireland socially separate and often in conflict with one another.

Claire Mitchell lectures in the Department of Sociology and Social Policy in Queen's University Belfast. She is currently carrying out research on evangelicalism and politics and has published articles in Sociology, Ethnic and Racial Studies, and on religion and politics in Northern Ireland.

'It is good to see the complexities of the Northern Irish situation presented with such clarity. All those interested in, and at times bewildered by the place of religion in Northern Ireland should not only read this book but bring it swiftly to the attention of their students. It will become an excellent teaching tool.' Grace Davie, University of Exeter, UK 'This will be a controversial book, for it considers an emotive topic and takes on some well-established arguments, but is likely to establish itself quickly as the definitive study of religion and politics in Northern Ireland. It is clear, lucid and extremely well written and has a refreshing blend of survey data and qualitative interviews. Mitchell establishes once and for all the role religion plays in Northern Ireland's conflict and it is not as simplistic or derivative as most people think'. John David Brewer, University of Aberdeen, UK 'This is a topic which is - in my view - going to become increasingly important both because of the importance of fundamentalist religion globally, and because of the continuation of conflict and crisis in Northern Ireland. This book should find a readership both in courses on the sociology (or politics) of religion in the contemporary world and in courses on Northern Ireland. I strongly recommend it'. Jennifer Todd, University College Dublin ’...concisely synthesizes the vast literature on religion, society, and politics in Northern Ireland... Recommended. All academic levels/libraries.’ Choice 'Overall this study is a valuable addition to discussion on the subject. It is a complex analysis of a difficult and controversial topic, more so as the author states it intends to challenge previous attitudes to the subject and she treads that particular path well.' Political Studies Review '... the book is very well-written and makes good use of current survey data in its always-reasonably-presented arguments. This book should be compulsory reading on any cour

Religion, Identity and Politics in Northern Ireland: Boundaries of Belonging and Belief