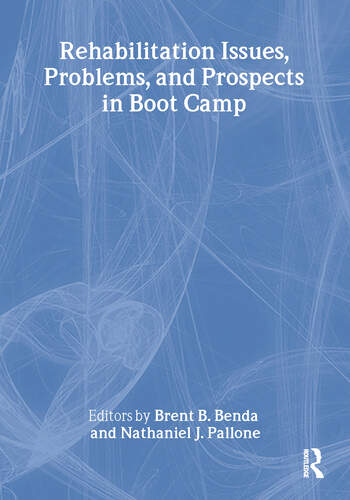 
Boot camps—what are their effects on criminal behavior?

Public and political support for boot camps as alternative correctional facilities has rarely faltered since their inception decades ago, though their efficacy remains uncertain. Rehabilitation Issues, Problems, and Prospects in Boot Camp explores all facets of the controversial issue, from the attitudes and perceptions of the public, to the political motivations in maintaining them, on to the latest research on the camps and their graduates. Respected authorities discuss boot camps’ effectiveness on diverse groups according to age, gender, race, and correctional facility. Cost factors between boot camps and other correctional institutions are compared, along with the latest criminal recidivism data.

Boot camps provide inmates with an uncomfortable, paramilitary-style environment with an eye toward shorter incarceration time, lower costs, and more positive effects on criminal behavior. Does this correctional model work as anticipated? Rehabilitation Issues, Problems, and Prospects in Boot Camp gives you the facts, revealing the public and political arguments for and against boot camps as well as the research on the theoretical predictors of criminal recidivism and the differing attitudes of attendees toward the facilities according to gender and race. Critical policy issues are identified and discussed in-depth, with particular emphasis given to the positive and negative aspects of rehabilitation possibilities of boot camps. Helpful tables clearly illustrate statistics while extensive references provide opportunities for further insight.