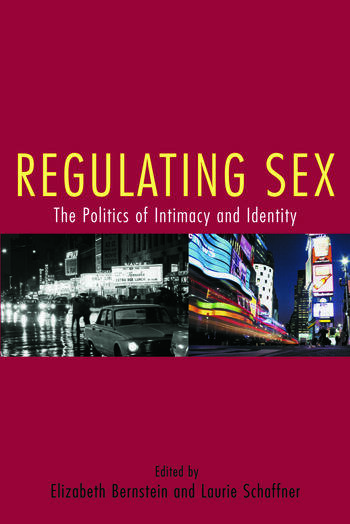 Regulating Sex: The Politics of Intimacy and Identity

"This is a politically engaged and theoretically nimble volume. Canvassing a wide range of topics--from age of consent laws to anti-trafficking activism, from the liberal state's simultaneous regulation and promotion of sexual commerce to battles for same-sex marriage and transgender equality--the essays collected here trace the perils and possibilities of confronting liberalism and its values. Regulating Sex is vital reading for scholars and activists alike." -- Ann Pellegrini, Associate Professor of Religious Studies and Performance Studies, New York University, co-author with Janet R. Jakobsen of Love the Sin: Sexual Regulation and the Limits of Religious Tolerance
"The authors in this edited collection astutely analyze the regulation of sexuality of various populations of western neoliberal nations of the global North, including transgenders, queers, prostitutes, children, and sex tourists. Together these essays link a variety of heteronormative configurations that are commonly viewed as discreet and separate. Regulating Sex is an important contribution to sexuality studies that confidently extends the parameters of the field to take up not just GLBT studies, but also those that focus on sex work and adolescent sexual practices." -- Kamala Kempadoo, Associate Professor, Latin American and Caribbean Studies, York University, co-editor with Jo Doezema of Global Sex Workers, and author of Sexing the Caribbean
"It is difficult to imagine a timelier book, in light of the current debate over same-sex marriage. This book is a must read for scholars and students of sexuality, social movements, and women's studies." -- Verta Taylor, Professor of Sociology, University of California, Santa Barbara, and co-author with Leila Rupp of Drag Queens at the 801 Cabaret

Regulating Sex: The Politics of Intimacy and Identity