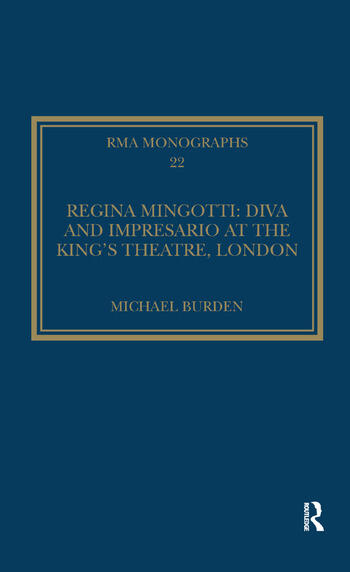 Regina Mingotti: Diva and Impresario at the King's Theatre, London

Regina Mingotti was the first female impresario to run London's opera house. Born in Naples in 1722, she was the daughter of an Austrian diplomat, and had worked at Dresden under Hasse from 1747. Mingotti left Germany in 1752, and travelled to Madrid to sing at the Spanish court, where the opera was directed by the great castrato, Farinelli. It is not known quite how Francesco Vanneschi, the opera promoter, came to hire Mingotti, but in 1754 (travelling to England via Paris), she was announced as being engaged for the opera in London 'having been admired at Naples and other parts of Italy, by all the Connoisseurs, as much for the elegance of her voice as that of her features'. Michael Burden offers the first considered survey of Mingotti’s London years, including material on Mingotti's publication activities, and the identification of the characters in the key satirical print 'The Idol'. Burden makes a significant contribution to the knowledge and understanding of eighteenth-century singers' careers and status, and discusses the management, the finance, the choice of repertory, and the pasticcio practice at The King's Theatre, Haymarket during the middle of the eighteenth century. Burden also argues that Mingotti’s years with Farinelli influenced her understanding of drama, fed her appreciation of Metastasio, and were partly responsible for London labelling her a 'female Garrick'. The book includes the important publication of the complete texts of both of Mingotti's Appeals to the Publick, accounts of the squabble between Mingotti and Vanneschi, which shed light on the role a singer could play in the replacement of arias.

Michael Burden is Professor in Opera Studies at University of Oxford, and is Fellow in Music at New College, where he is also Dean. His published research is on the theatre music of Henry Purcell, on the staging of opera and dance in London in the seventeenth, eighteenth, and nineteenth centuries; his on-going research includes the administration of the Pyne-Harrison and English Opera Companies. He is currently working on two databases, the Italian Aria on the London Stage before 1801, and The London Stage 1800-1900, a calendar of performances. He organises the annual Oxford Dance Symposium with Jennifer Thorp, with whom he co-edited the Ballet de la Nuit Rothschild B1/16/6 in 2010.

’All in all, this volume makes a substantial contribution to our knowledge of Mingotti, and of cultural life and its organisation in mid 18th-century London’. The Consort '... this monograph is a welcome contribution to work on female performers in theatre and music in the eighteenth century.' Restoration and Eighteenth-Century Theatre Research

Regina Mingotti: Diva and Impresario at the King's Theatre, London