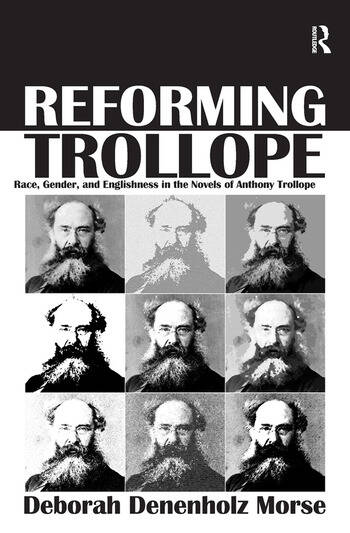 Reforming Trollope: Race, Gender, and Englishness in the Novels of Anthony Trollope

Trollope the reformer and the reformation of Trollope scholarship in relation to gender, race, and genre are the intertwined subjects of eminent Trollopian Deborah Denenholz Morse’s radical rethinking of Anthony Trollope. Beginning with a history of Trollope’s critical reception, Morse traces the ways in which Trollope’s responses to the political and social upheavals of the 1860s and 1870s are reflected in his novels. She argues that as Trollope’s ideas about gender and race evolved over those two crucial decades, his politics became more liberal. The first section of the book analyzes these changes in terms of genre. As Morse shows, the novelist subverts and modernizes the quintessential English genre of the pastoral in the wake of Darwin in the early 1860s novel The Small House at Allington. Following the Second Reform Act, he reimagines the marriage plot along new class lines in the early 1870s in Lady Anna. The second section focuses upon gender. In the wake of the Second Reform Bill and the agitations for women's rights in the 1860s and 1870s, Trollope reveals the tragedy of primogeniture and male privilege in Harry Hotspur of Humblethwaite and the viciousness of the marriage market in Ayala's Angel. The final section of Reforming Trollope centers upon race. Trollope's response to the Jamaica Rebellion and the ensuing Governor Eyre Controversy in England is revealed in the tragic marriage of a quintessential English gentleman to a dark beauty from the Empire's dominions. The American Civil War and its aftermath led to Trollope's insistence that English identity include the history of English complicity in the black Atlantic slave trade and American slavery, a history Trollope encodes in the creole discourses of the late novel Dr. Wortle's School. Reforming Trollope is a transformative examination of an author too long identified as the epitome of the complacent English gentleman.

Deborah Denenholz Morse is the Vera W. Barkley Term Professor of English and Inaugural Fellow for the Center for the Liberal Arts at William and Mary, as well as a Plumeri Faculty Excellence Scholar.

'To say that this is the most important work we now have on Anthony Trollope understates its value. Deborah Morse, for some time our most influential Trollope scholar, here gives us a thunderous book, such a remarkable and bold set of readings that we must wonder at how timid we were. Morse's new Trollope, now our Trollope, is a reformer of gender, politics (in the largest sense), and--get this!--race. Morse writes this audacious book with such lucidity, grace, and good-heartedness that it works on us much as a Trollope novel does--working into our minds and beings, not just persuading us but making us new.' James R. Kincaid, University of Southern California, USA ’If Anthony Trollope is the Victorian novelist for our neoliberal age, then Deborah Morse’s Reforming Trollope is the ideal accompaniment for the scholarly reader. Erudite and witty, timely and topical, Morse’s study will reward new Trollope enthusiasts and specialists alike. The attention to works that highlight Trollope’s complex engagement of genre, gender, and race will spark new conversations on this ever more fascinating Victorian writer.’ Lauren M. E. Goodlad, University of Illinois, Urbana, US, author of The Victorian Geopolitical Aesthetic: Realism, Sovereignty, and Transnational Experience ’Morse expertly combines close literary analysis with careful research on historical eventualities and the ideological significances of the works’ context.’ Review of English Studies ’What this biography does achieve is to piece together, at times ingeniously, the fragmented and wayward life of a unique man of letters.’ Library and Information History '... Morse does nothing if not pay close attention to Trollope and the study of his work. Contending with her readings and with the impressive amount and variety of evidence that she brings to support her claims thus promises to yield more thoughtful analyses and learned readings of Trollope and his world. The pleasure of this kind of su

Reforming Trollope: Race, Gender, and Englishness in the Novels of Anthony Trollope