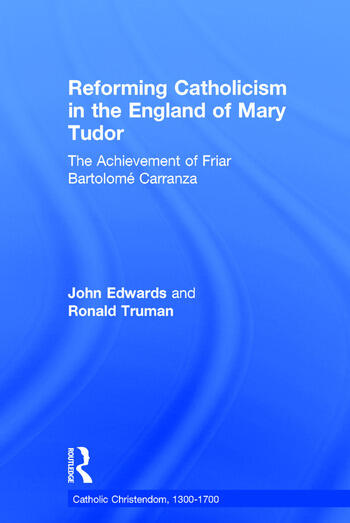 Reforming Catholicism in the England of Mary Tudor: The Achievement of Friar Bartolomé Carranza

In the history of the attempted restoration of Roman Catholicism in the England of Mary Tudor, the contribution of her husband Philip and his Spanish entourage has been largely ignored. This book highlights one of the most prominent of Philip's religious advisers, the friar Bartolomé Carranza. A leading Dominican, Carranza served the emperor Charles V, whom he represented at the earlier sessions of the Council of Trent, and then Philip II of Spain, who brought him to England. Even before Mary's death, Fray Bartolomé left for the Low Countries, and then returned to Spain, where, as archbishop of Toledo, he was arrested for 'heresy' by the Spanish Inquisition. His trial, first in Spain and then in Rome, lasted from 1559 until shortly before his death, partially rehabilitated, in Rome in 1576. The book contains papers on the activity and intellectual character of the English Church under Mary, on Carranza's eventful life, particularly his activity in England, and on his often close collaboration with his friend Cardinal Reginald Pole, set in the wider context of sixteenth-century Catholicism. Attention is also drawn both to Carranza's perhaps surprising subsequent fame and influence in the Spanish Church, and to the common ground which, despite obvious differences and subsequent divisions, did indeed exist between reformers in Spain and England.

'This work is highly significant because the material Professor Tellechea pieced together from the archives was previously unknown to English historians.' Church History

Reforming Catholicism in the England of Mary Tudor: The Achievement of Friar Bartolomé Carranza